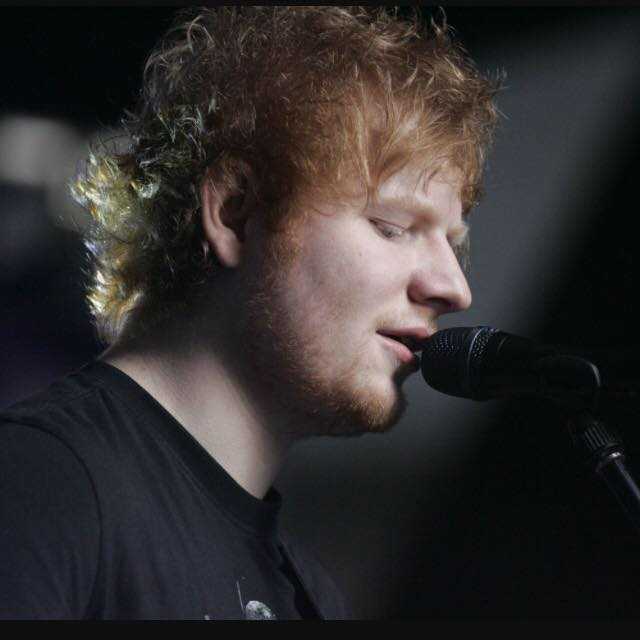 Everything will be okay in the end. If it's not okay, then it's not the end

If someone tells you to change yourself, tell them to go fuck themselves

Pain is only relevant if it still hurts.

Edward Christopher Sheeran is an English singer, guitarist, record producer, and actor. Ed Sheeran became much popular after the release of his first album titled “+.” The famous singer and songwriter  Sheeran has sold more than 150 million records worldwide, making him one of the world’s best-selling music artists. He is nearly to be the UK’s “Youngest Billionaire Musician”. Sheeran is also a prolific songwriter for other artists as well. He and his long-standing collaborator  Justin Bieber recently released a song called ‘I Don’t Care’ together.

Ed Sheeran is popular for his singing skills and his melodious voice, debut single “The A-Team”, and debut album “+”, released in 2011. Sheeran marked his name to be one of the singers to have most of the elements of folk, hip-hop, pop, dance, soul, and rock included in his songs that can be heard in his big hits “The A-Team,” “Sing,” “Thinking Out Loud,” and “Shape of You”.

He is an occasional rapper and actor as well.

Who is Ed Sheeran’s Family?

Ed Sheeran was born on 17th February 1991 in Halifax, West Yorkshire, UK. Later, moved to Hebden Bridge, UK(United Kingdom). His birth name is Edward Christopher Sheeran. His nationality is  British and Aquarius is his zodiac sign. He has English-Irish ancestry.

Ed Sheeran was born to John Sheeran(father) and Imogen Lock(mother). His father John Sheeran is an art curator and lecturer, whereas his mother Imogen is a culture publicist, who later became a jewelry designer. His parents run “Sheeran Lock”, an independent art consultancy. Sheeran’s parents are British while his grandparents are Irish.

Ed has an older brother named Mathew Sheeran, who works as a classical composer.

Ed Sheeran is a second cousin of Gordon Burns who is a Northern Irish broadcaster and a host of the British game show “The Krypton Factor”.

How was Ed Sheeran’s Early Life?

Ed Sheeran started showing interest in music from quite a young age. From an early age, Ed started playing the guitar as well as singing. His father also used to take him to various musical concerts which inspired him to a great extent. According to him, Van Morrison’s studio album ‘Irish Heartbeat’ inspired him the most, and made him decide to choose a career in music. Eric Clapton, Paul McCartney, and Bob Dylan were some of the people who inspired him in his early years.

Ed Sheeran sang in a local church choir at the age of four. He learned to play the guitar when he was studying at “Rishworth School”. Sheeran then studied in “Thomas Mills High School” in Framlingham where he began writing songs.

He joined the “National Youth Theatre” in London when he was a teenager. Later, in 2007 he joined “Youth Music Theatre” and he also studied Artist Development with the help of ‘Access to Music’, a UK-based independent training provider.

When he was 16, he was dropped out of school and moved to London, so he makes a go of his professional career, landing work as a guitar tech and auditioning unsuccessfully for the ITV series Britannia High.

From his teenage days, he had started recording CDs and selling them. Ed started writing music in his early teens, and at the age of 14, he released ‘The Orange Room’ and also ‘Spinning Man’, both regarded as important works of his early years.

How was Ed Sheeran’s Career Life?

Ed Sheeran started his career in the year 2006 with the release of an album named after himself. In the following year, he released another album named “Want Some.” In the year 2008, he moved to London and started playing at small venues,  and after that, he collaborated with an English musician and songwriter named Leddra Chapman. He also briefly attended the “Academy of Contemporary Music” in Guildford, Surrey, England. In April 2010, he went to Los Angeles to attend a poetry night.

He performed there, and the famous American actor and comedian named Jamie Foxx was very much impressed by him and also allowed him to use his recording studio.

His online and offline fan following started increasing. After that, he released two Extended Plays by himself namely “Songs I wrote with Amy” and “Ed Sheeran: Live at the Bedford.” Later in January 2011, he released another EP named “No. 5 Collaborations Project”. This project can be regarded as one of his important works.

He wanted the record to be free from ‘songs about girls’ and thus featured tracks on topics such as a car crash, saying goodbye to someone, etc. He also has worked with rappers like Richard Cowie and James Davlin. Though it received average reviews from the critics well received by the audience. He performed his debut single titled “The A-Team” in the TV music show “Later… with Jools Holland” in April 2011.

This was a big hit, and 58,000 copies sold in the first week. This was on the list of top ten in many countries like New Zealand, Norway, Japan, and Australia.

In August 2011, he released his second single “You Need Me, I Don’t Need You,” and this also became quite famous. His third single titled “Lego Single” and which was also a big hit and reached the top five in several countries including UK, New Zealand, Ireland, and Australia.

He rose to international fame after the release of his first album “+” on 12th September 2011. It is one of the most significant works of his career so far. The album is strongly influenced by the hip-hop duo Nizlopi as well as musician Damien Rice. It gained number one in many countries and in the UK alone, 1,021,072 copies sold within six months which became the “Eighth Best Selling Album of the decade”. This album led to the growth of Sheeran’s popularity worldwide.

Even a lot of singers were impressed by him including Taylor Swift, and later she worked with him on a single titled “Everything Has Changed.” His second album titled “x” (multiple) released on 23rd June 2014 is another one of his most popular works.

X debuted at number one on both sides of the Atlantic and Asylum Records and generated the huge hits “Thinking Out Loud” and “Sing,” success that helped Sheeran secure a win for Album of the Year in the 2015 Brit Awards, along with the trophy for Best Male Solo Artist. His success wasn’t limited to Britain.

X was the second biggest-selling album in the world in 2015, and “Thinking Out Loud” took home the Grammys for Song of the Year and Best Pop Solo Performance in 2016. The album sold more than 8.6 million copies all over the world, becoming one of the “Best Selling albums ever”.

Sheeran spent the majority of 2016 recuperating and recording his third album with executive producer Benny Blanco and famous American record producer Rick Rubin. Early in 2017, he released two singles, “Castle on the Hill” and “Shape of You,” with the latter reaching number one on the charts throughout the world.

This was also a big hit. This album was ranked at number one both in the UK Albums Chart and in the US Billboard 200.

Their parent album, “÷” appeared in March. “÷” topped the pop charts in over 20 territories, including the U.K. and U.S., and it generated another international hit in “Galway Girl.” Ed Sheeran’s massive popularity was confirmed in June 2017, when he was awarded an MBE on the occasion of the Queen’s Birthday Honours.

How is Ed Sheeran’s Personal Life?

Ed Sheeran was in a relationship with Scottish singer-songwriter Nina Nesbitt. Nina Nesbitt was in his music video “Drunk” in 2012. Nesbitt is the subject of Sheeran’s songs “Nina” and “Photograph”, while most of Nesbitt’s album, Peroxide, is about Sheeran.

However, they end up their relationship and got broke up. In January 2014, Sheeran was in a relationship with Athina Andrelos, who works for chef Jamie Oliver. She is the inspiration for Sheeran’s song “Thinking Out Loud”, however, they broke up in February 2015. Since July 2015, Sheeran has been in a relationship with a childhood friend and former high school classmate Cherry Seaborn. They announced their engagement in January 2018 and in August 2018 he hinted that they married in a private ceremony.

Ed was rumored to be dating different famous women, including Taylor Swift, Ellie Goulding, and Selena Gomez. However, he had not too many officially confirmed romances. However, Sheeran is a very close friend with singer-songwriter Taylor Swift, and collaborated on her albums “Red” and “Reputation”.

In early 2011, Ed Sheeran purchased and renovated a farm near Framlingham, Suffolk. During 2013, he lived between Hendersonville, Tennessee, and Los Angeles, California. In 2014, he bought a house in South London.

Sheeran is a supporter of his local football club “Ipswich Town F.C”. Ed is also a collector of Panini’s FIFA World Cup sticker album, he completed the 2014 World Cup album.

How much is Ed Sheeran’s Net Worth?

Ed Sheeran’s main source of income is his music including album sales and live performances. The red-haired singer Ed Sheeran has an estimated net worth of $65 million.

In June 2015, Forbes listed his earnings at $57 million and ranked him the 27th-highest-earning celebrity in the world. In July 2018, Sheeran was named 9th on the list of the highest-paid celebrities. Sheeran has also secured first place in the Young Musicians Rich List, specifically for British artists, followed closely by all five members of One Direction.

According to the Sunday Times Rich List of 2019, Sheeran is worth £160 million ($207 million) as the 17th richest musician in the UK and he could soon be the UK’s youngest billionaire musician.

The ‘Shape of You’ singer has been smart with his money, investing his fortune in numerous multi-million-pound properties across the UK. He now ranks above Adele, largely thanks to profits from his 94-gig 2018 world tour.

He has distinct body features. Ed has fire red hair and blue eyes. He has a round face with untidy or messy hair.

Awards and Achievements Of Ed Sheeran

On 19 October 2015, Sheeran received an honorary degree from the “University of Suffolk” in Ipswich for his “outstanding contribution to music”. Sheeran was appointed as a “Member of the Order of the British Empire” (MBE) in the 2017 Queen’s Birthday Honours for “services to music and charity”. He received the award from Prince Charles at Buckingham Palace on 7 December 2017.

Our contents are created by fans, if you have any problems of Ed Sheeran Net Worth, Salary, Relationship Status, Married Date, Age, Height, Ethnicity, Nationality, Weight, mail us at [email protected]