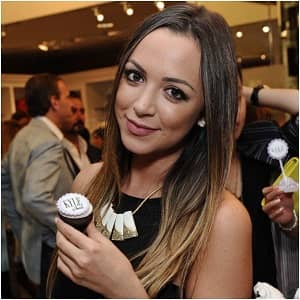 Farrah Aldjufrie is an American reality TV star. She is famous for her appearance in ‘The Real Housewives of Beverly Hills’. She is the daughter of Kyle Richards who is an actress, socialite, TV personality, and philanthropist.

Farrah Aldjufrie was born on October 31, 1988 in Beverly Hills, California. As of 2021, her age is 32. She was raised in Beverly Hills and at the time of her birth, her parents Kyle Richards (mother) and Guraish Aldjufrie (father) were married.

Her parents got married in 1988 when her mother got pregnant with Farrah. A couple of years later, they separated & divorced two years later. Her father, Guraish Aldjufrie is an Indonesian citizen having Arab and Dutch ethnicity. She is very close to her father and she visits her father occasionally.

It was her mother Kyle Richards who raised her in the US after her father returned. Her mother married Mauricio Umansky in 1996 and through her mother’s second marriage she has three younger sisters named Alexia, Sophia, and Portia. Since 2010, her mother has appeared as a main cast member on The Real Housewives of Beverly Hills, and as of 2020, she is the only remaining original cast member on the show.

How did Farrah Aldjurie become famous?

Farrah Aldjurie started falling in love with real estate from a young age as she got to know about the profession first hand with the help of her step father, Mauricio Umansky who is a real estate magnate himself. After earning her graduation from university, she joined her step father’s business which was then titled ‘Umansky Group’.

She was a leading team member in the development of his next business, ‘The Agency’. Aldjurie first worked there as an Executive Assistant to her stepfather, before getting promoted to the role of Director of Client Relations. She earned the ‘Outstanding Rookie of the Year’ Award by ‘Luxury Real Estate’ and in 2015, she made it to The Wall Street Journal’s list of ‘Top 250 Realtors in the US’.

In October 2014, she began appearing on the reality television show, ‘The Real Housewives of Beverly Hills’ alongside her mother. She made regular appearances along with her sisters on the show and has stated that she is glad that she was older when she started appearing on television as Farrah does not think she would have coped with growing up on-air the way her younger sisters have.

How much money does Farrah Aldjurie earn? Net Worth, Salary

As a real agent, Farrah Aldjurie has sold many multimillion-dollar mansions in Southern California. As of 2021, she has an estimated net worth of around $5 million.

Farrah Aldjurie is currently in a relationship with Alex Manos. Her boyfriend, Manos is an entrepreneur and owns Beverly Hills Car Club in Los Angeles.

They have not revealed how and when they met exactly. However, it has been over three years since they started dating. Since then, they have been seen attending several events together. There is no information about her previous relationships.

Aldjurie stands at a height of 5 feet 2 inches. She has brown hair and a pair of green eyes. There is no information about her weight and other body measurements.

Our contents are created by fans, if you have any problems of Farrah Aldjufrie Net Worth, Salary, Relationship Status, Married Date, Age, Height, Ethnicity, Nationality, Weight, mail us at [email protected]