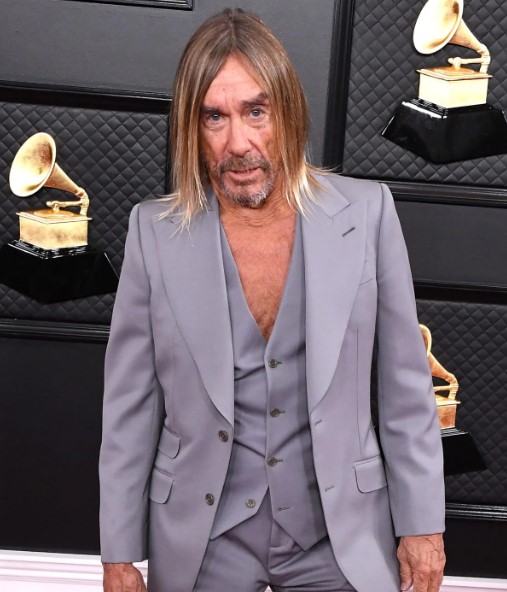 Iggy Pop is an American singer, songwriter, musician, record producer, and actor who is also designated as the “Godfather of Punk” in the music industry with his debut as the vocalist and lyricist in the influential proto-punk band, “The Stooges” since 1967. Pop had his solo career started with his solo debut, “The Idiot”(1977).

He has won altogether 7 awards with over 10 nominations including Classic Rock Roll of Honour Awards(2009) and Grammy Lifetime Achievement Award(2020). Besides, Pop was also inducted as part of the Stooges into the Rock and Roll Hall of Fame in 2010. Pop is quite active in social media sites, with his twitter account: @IggyPop and Instagram account: @iggypopofficial.

What is Iggy Pop Famous for?

Iggy Pop was born on April 21, 1947, in Muskegon, Michigan, United States. His birth name is James Newell Osterberg Jr. His nationality is American. Pop belongs to White ethnicity and is of English-Irish-Danish-Norwegian descent while Taurus is his zodiac sign.

Pop was raised in a trailer park in Ypsilanti, Michigan where he played with various high school bands including “The Iguanas”, a band and his parents even let him use the master bedroom, as it was the only room in that trailer that was big enough to accommodate his drum kit. He later changed his name to Iggy Pop inspired by the band.

After graduating from high school, he joined the University of Michigan shortly before dropping out to pursue a career in music.

Iggy Pop has won altogether 7 awards and several nominations. Some of them including 2 Creem Magazine Awards, a GQ Men of the Year Awards,  a Critics’ Choice Documentary Awards, a Q Awards, and 2 Grammy nominations.

In 2009, Pop was awarded the Classic Rock Roll of Honour Awards as a living legend. In 2020, Pop was awarded a Grammy Lifetime Achievement Award. Besides, Iggy was inducted into the Rock and Roll Hall of Fame with “The Stooges” in 2010.

Who is Iggy Pop Married to?

Iggy Pop has married three times throughout his life. He was first married to Wendy Weissberg. They got married in 1968 but the marriage lasted for a few weeks and was canceled shortly thereafter in November 1969.

Later, he got married to his second wife, Suchi Asano. Asano is an actress with whom he got married in 1984 and their relationship lasted for almost 14 years before they divorced in 1999.

Currently, Pop is married to his third wife, Nina Alu. Nina and Iggy got married in 2008 and their marriage doesn’t seem to be week as they have been living for a decade together now. Pop has a son named Eric Benson, born in 1970 from a relationship with Paulette Benson.

How Tall is Iggy Pop?

Iggy Pop is a handsome man in his 70s. He has quite maintained athletic body physique. He stands tall with a height of 5ft. 6inches while his body weighs around 65kg. He has a fair complexion with long blonde hair and blue eyes.

What is the Net Worth of Iggy Pop?

The legendary pop singer, Iggy Pop has quite a great earnings from his professional career as a singer. Working in this field for more than 4 decades, he has managed to amass million worth fortune from his several albums and singles.

He also makes money from several tours and concerts and also from movies and series. His current estimated net worth is around $24 million.

Our contents are created by fans, if you have any problems of Iggy Pop Net Worth, Salary, Relationship Status, Married Date, Age, Height, Ethnicity, Nationality, Weight, mail us at [email protected]