Jihyo is a South Korean singer and member of TWICE. She is the leader and main vocalist. 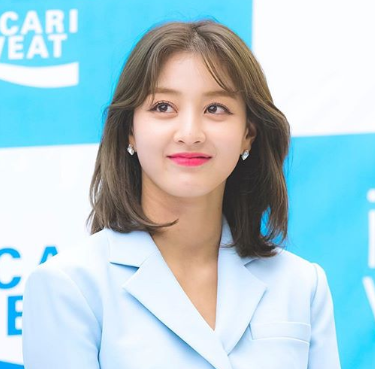 "Something you don't have to search far away but something in front of your eyes.

No matter who looks at it, it's me who is worthy."

Jihyo (Twice) Don't Give Up.

Jihyo is a South Korean singer and member of TWICE. She is the leader and main vocalist. Her strong voice and body size make her unique in the group. She was known mostly pre-debut as the face of Innisfree’s teen line “TN” with boy band Boyfriend and later with future group mate Nayeon. She was set to debut in the girl group 6mix along with future groupmates Nayeon, Jeongyeon, and Sana and some ex-trainees, prior to competing on Sixteen, but the project was canceled. Read more on her love life, a career highlight, and physical attributes.

TWICE’s Jihyo And Kang Daniel Confirmed To Be Dating

Jihyo and Kang Daniel are confirmed to be dating!

In response to the previous reports, Jihyo’s agency JYP Entertainment and Kang Daniel’s agency KONNECT Entertainment commented, “They are currently meeting with interest in each other.”

A source close to the two idols shared, “An [idol] sunbae close to Kang Daniel and Jihyo introduced the two to each other.”

Dispatch further reports that Kang Daniel and Jihyo meet over once a week. They were reportedly together on the day before Jihyo flew out of the country for TWICE’s world tour and the day after she flew back in. Jihyo also reportedly met with Kang Daniel after his solo debut showcase on July 25.

The dispatch states that Jihyo and Kang Daniel are already an “official” couple in TWICE. One of the members reportedly gave her a ride to Kang Daniel’s house and returned to pick her up again.

In response to this report, TWICE’s agency JYP Entertainment and Kang Daniel’s agency KONNECT Entertainment stated, “We have seen the report and are checking the facts.”

Where is Jihyo born?

Recalling her early life, Jihyo’s birthname was Park Ji-soo, she legally changed her given name to Jihyo when she was 18 years old. Her parents have been supportive of her passions. It is evident through the fact that they let her become a JYP trainee for 10 years. She has two younger sisters, Seoyeon and Jiyoung.

JYP Entertainment scouted her when she was in the third year of her Elementary school after she received second place in a child actor competition. Further, she is South Korean by nationality and belongs to Asian ethnicity. She is Christianity by faith and her birth sign is Aquarius. Her hometown is Guri, Gyeonggi-do, South Korea.

When did Jihyo pursue her career as a vocalist?

Is Jihyo dating someone?

Reflecting on her personal life, Jihyo is currently in a relationship with Kang Daniel. It was confirmed by JYPE on 05th August 2019. It was also revealed that 2 AM member Seulong introduced him and Jihyo to each other.

Previously, There was a slight rumor that Jihyo was dating JB, a member of the k-pop group Got7. Fans claim that the two are very close to each other. When the two appeared in an advertisement for “NBA Style Korea,” more speculations started emerging. However, no progress has been seen ever since, so netizens claim nothing is going on between the two.

How much net worth does Jihyo own?

Jihyo’s net worth is not yet known. Many Korean entertainers do not go public with their worth. In the case of disclosure, we will let you know.

How tall is Jihyo?

Observing her body physics, Jihyo stands a height of 5 feet 3 inches and weighs around 56 kg. She has a pair of black eyes and brown hair color. Her other body information is yet to be revealed. In the case of revealed, we will let you know.

Our contents are created by fans, if you have any problems of Jihyo Net Worth, Salary, Relationship Status, Married Date, Age, Height, Ethnicity, Nationality, Weight, mail us at [email protected]