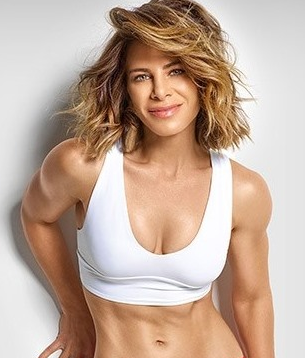 Jillian Michaels is a successful personal trainer and also a businessperson, author, and television personality. She is widely recognized for her appearances on NBC’s “The Biggest Loser” and “Losing it with Jillian”. She has also appeared on the talk show “The Doctors”. Let’s know more about her through this article.

What is Jillian Michaels famous for?

Her appearances on NBC’s, ‘The Biggest Loser’ and ‘Losing it with Jillian’.

Where is Jillian Michaels born?

Recalling her early life, Jillian was born in Los Angeles, California, USA. Her nationality is an American and ethnicity is mixed (Syrian/Lebanese, Italian and Ashkenazi Jewish). Her mother’s name is JoAnn McKarus and her father’s name is Douglas McKarus. Her parents had divorced when she was very young. She was raised in Santa Monica. She was bullied by her classmates. Hence, her childhood was traumatic and she ha a sleep disorder.

Where is Jillian Michaels go for education?

Concerning her education details, Jillian attended California State University at Northridge. At that time, she got a job as a bartender and a fitness trainer.

What is the profession of Jillian Michaels?

Jillian got a job as an agent for International Creative Management after graduation. She despised her work. In 2002, she partnered with Jackie Warner to open Sky Sports & Health Spa, a fitness center.

She had a chance to discover herself in 2005 when she was cast as one of the trainers on NBC’s “The Biggest Loser.” For the rest of her career, this program gave her enormous fame and stardom. She also made an appearance on Jillian’s show “Losing It.” NBC broadcasted this program.

She joined CBS television as the co-host of The Doctors in 2011. She quit the show in 2012 due to the poor structure.
In 2015, she created a new infomercial called BODYSHRED, which included a 60-day home workout program.

She hosted and co-judged a Spike series called Sweat, INC in the fall of 2015. Just Jillian, her reality television show, debuted on E! in January 2016.

Is Jillian Michaels married or not?

Reflecting on her personal life, Jillian is a lesbian. She announced her engagement with Heidi Rhoades on March 8th, 2016. They have two children. Unfortunately, the couple announced the end of their relationship in June 2018.

Similarly, She also adopted a two-year-old daughter from Haiti in 2012. She gave birth to a boy child in the same month. Her son is named Pheonix Michaels Rhoades and the daughter’s name is Lukensia Michaels Rhoades.

How much is Jillian Michaels’s worth?

Being a personal trainer, reality show personality, talk show presenter, and entrepreneur, Jillian earns a decent amount of money and fame through her multiple professions in the field of the entertainment industry. Based on some online reports, her estimated net worth said to be $14 million at present. However, her salary is yet to be disclosed.

How tall is Jillian Michaels?

Observing her body physics, Jillian stands a height of 5 feet 2 inches and weighs around 52 Kg. Similarly, she has an athletic and hourglass body with a body measurement of 34-24-34 inches. She used 34B bra size and 9 (US) shoe sizes. Further, her eyes color is hazel and hair color is light brown.

Our contents are created by fans, if you have any problems of Jillian Michaels Net Worth, Salary, Relationship Status, Married Date, Age, Height, Ethnicity, Nationality, Weight, mail us at [email protected]