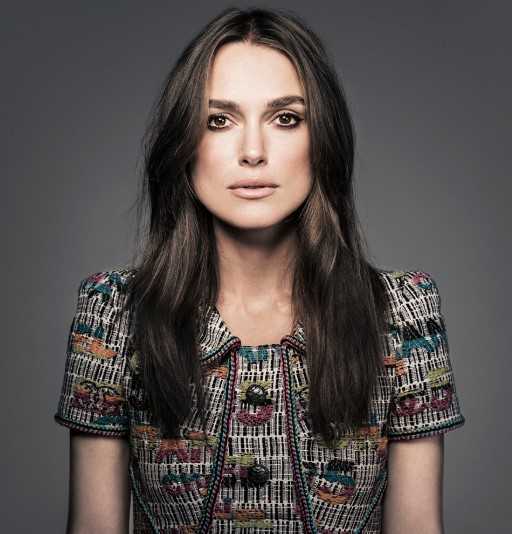 Keira Knightley is a well known British actress who has been the face of the film industry for a very long time. Nominated for two British Academy Film Awards, three Golden Globe Awards, two Academy Awards and winning 25 awards altogether, Knightley has been a recognizable talented personality. She has appeared in many movies such as “Bend it Like”, “Begin Again”, and “The Everest”. Further, she was appointed as the Officer of the Order of the British Empire for services to drama and charity.

What is Keira Knightley famous for?

When was Keira Knightley born?

Keira Knightley was born on March 26, 1985, in Teddington, England, United Kingdom. Her birth name is Keira Christina Knightley. Knightley belongs to British nationality and English is her ethnicity. Her zodiac sign is Aries.

Knightley was born in a well family to Will Knightley(father) and Sharman Macdonald(mother). Her father was a TV actor while her mother was a renowned play writer. She was raised in her hometown with all luxury along with her elder brother, Caleb Knightley.

She did her early schooling from Stanley Junior School and then from Teddington School. She was diagnosed with a disease called dyslexia for which her treatment was carried at her young age Due to this reason, she was a very slow reader and cannot read out loud. Since her childhood, she was interested in acting.

She also played in the play “After Juliet” which was written by her mother. She attended Ester college where she mainly focused on art, history and English Literature. Shen then left her studies to concentrate on her acting career. Knightley at the age of six began working in commercials and small television roles.

Who is Keira Knightley Married to?

Keira Knightley is a married woman. She is married to a musician, James Righton after being in 2-year relations with him. The couple tied a knot on May 4, 2013, in Mazan. Vaucluse. They together are blessed with two daughters, Edie and Delilah. She believes in equal paternity and is currently living a happy life with her husband and daughters in East London.

Previously, in 2001, Knightley dated Del Synnott, an actor with whom she met during the filming of “Princess of Thieves”. The couple, however, broke up in 2003. She then subsequently dated popular actor and model, Jamie Dornan in 2003 until 2005. She then dated “Pride & Prejudice” co-star, Rupert Friend in 2005. The couple was in relation for 5 long years until they broke up in December 2010.

Also, when Knightley was 22, she had a mental breakdown and was diagnosed with posttraumatic stress disorder. She even had to have hypnotherapy to prevent panic attacks. Knightley is also the face of an Amnesty International campaign to support human rights.

What is the net worth of Keira Knightley?

The 34 years old actress, Keira Knightley has been able to rise and flourish in her career as she has been working in the film industry since she was 6. Knightley has managed to amass a fortune worth million dollars through several movies and dramas. she has an estimated net worth of around $60 million.

Knightley reportedly earned $5 million to $7 million per film for her role as Elizabeth Swann in the “Pirates of the Caribbean film”. She adds few more dollars to her fortune through her endorsements like Asprey, Shiatzy Chen, Lux haircare products, and Chanel.

How Tall is Keira Knightley?

Keira Knightley is a beautiful actress who has a well maintained hour glass slim body physique. Knightley has a fair complexion with an oval face and distinct high cheekbones, black hair, and brown eyes. Knightley stands tall with a height of 5ft. 7inch. while her body weighs around 55kg. She has a body measurement of 32-23-33 inches with 9(US) as her shoe size and 4(US) as her dress size.

Our contents are created by fans, if you have any problems of Keira Knightley Net Worth, Salary, Relationship Status, Married Date, Age, Height, Ethnicity, Nationality, Weight, mail us at [email protected]