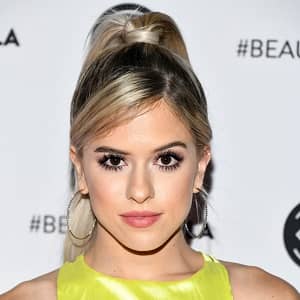 Kelianne Stankus is a gymnast, dancer, and social media personality from America. She is best known as a member of ‘the Acrobots’, a group that performs routines on hoverboards. Stankus is very popular on TikTok where she has over 7.7 million followers.

How old is Kelianne Stankus?

She grew up with her two siblings named Lucas and Cody. Ever since she was a kid, she loved gymnastics and dancing.

Kelianne Stankus began her career as a gymnast at a young age. She first caught the social media attention as a member of ‘Acrobots’, a group which is well-known for performing routines on hoverboards. With the group, Stankus directed and performed in a routine on Justin Bieber’s ‘Sorry’, which went on to become viral and a huge hit on YouTube. As a gymnast, she has also performed as part of the US National Acrobatic Gymnastics team.

Moreover, she is also a dancer and social media personality. Stankus regularly posts her dance videos on YouTube on her self-titled channel. Moreover, she also posts makeup, challenges, pranks, tags, etc on her channel. On October 30, 2017, she posted a video titled ‘Easy Last Minute Lion Halloween Costume’. After posting the video, she took a break for several months and finally returned in October 2018 with a video titled ‘My Ex Boyfriend? | Q&A!’. The most popular video on her channel is titled ‘I can see again |Kelianne Stankus’. As of August 2020, her channel has over 162k subscribers and her videos have gained around 2 million views.

In November 2015, she made her television debut alongside Kailey Maurer in ‘The Ellen DeGeneres Show.’

How tall is Kelianne Stankus?

Stankus stands at a height of 5 feet 4 inches and weighs around 55 Kg. Her body measurements for breasts, waist, and hips are 34-24-37 inches. She has blonde hair and a pair of brown eyes.

What is the Net Worth of Kelianne Stankus?

Kelianne Stankus has an estimated net worth of around $300k as of 2020. She has earned a decent amount of money from her career as a gymnast, dancer, and social media personality.

Who is Kelianne Stankus dating?

Kelianne Stankus is currently dating Chase Mattson. He is an American model and social media personality. Stankus herself admitted to J-14 that the couple met on Instagram and she slid into his DMs. She didn’t say when but it looks like they have been dating since 2020. The couple looks really close to each other and regularly post pictures and videos on social media.

Previously, she was in a relationship with Zach Cox. The couple started dating in September 2019 but broke up in November 2019. Moreover, she has also admitted to having a history with Taylor Holder.

Our contents are created by fans, if you have any problems of Kelianne Stankus Net Worth, Salary, Relationship Status, Married Date, Age, Height, Ethnicity, Nationality, Weight, mail us at [email protected]