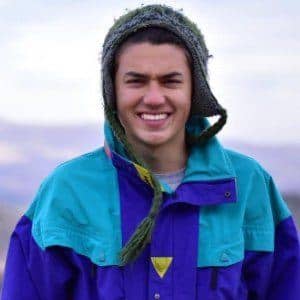 Where is Kelly Wakasa from?

Kelly Wakasa was born on November 27, 1999. So, currently, he is 21 years old and falls under the zodiac sign of Sagittarius. He was born in Hillsborough, California, USA, and has spent his childhood there. He holds an American nationality.

Talking about his family background, there’s no information on his birth parents at the moment. However, he was raised with two siblings, his older brother, and younger sister. Though their names are not given either. Even so, his older brother has played professional soccer for Phoenix Rising FC. Focusing on his educational qualification, he joined the ‘University of Arizona Campus’ in September of 2020.

How did Kelly Wakasa rise to fame?

Kelly Wakasa is an American Skateboarder famous on social media for sharing his skating content. He also shows off his photography and videography skills on the networks. His youtube channel has garnered more than 540k subscribers till now. Other than skateboarding, he was a good soccer player and also had made it to the national team.

He began his professional career on Youtube after that and created his Youtube channel on 20th November 2013. He started to post his skateboarding skills on his youtube channel in April 2014. Moreover, he has opened his own business and has released his own merchandise line.

A few of his popular youtube videos are ‘Going Back to High School UNDERCOVER on FIRST DAY!’, ‘Surprising My Best Friend After Years Apart!’, ‘Handboarding VS Fingerboarding Game of SKATE with Fetty Potter!’, ‘Going on Date with My Crush 8 Years Later!’, ‘LAND a TRICK for MONEY$$$’,.

How much net worth does Kelly Wakasa earn?

Kelly Wakasa is famous for his Skateboarding skill on social media. So, he must earn a decent amount to make a living of it. His main source of income is his Youtube channel and other social media platforms. His estimated net worth is said to be $200,000 as of the year 2020.

How tall is Kelly Wakasa?

Kelly Wakasa stands tall at the height of 5 feet 11inches and weighs around 74 kilos. He has a good-looking and handsome face and in addition to that, he has a charming and attractive personality. He stays fit and has a healthy muscular body. Other details on his body measurement are not available at the moment. Furthermore, he has a pair of beautiful dark brown eyes and hair of the same color.

Is Kelly Wakasa dating anyone?

Speaking of his relationship status, he is currently single and unmarried. He does not reveal information about his personal life, love life, and past affairs on social media. So, there’s no information even on his past partners. Nevertheless, he most probably is single and is more focused on building his career rather than on relationships.

Kelly owns a self-titled Youtube channel ‘Kelly Wakasa’ with more than 540k subscribers. And on Kelly and his bestfriend, Luke Eich, collaboration channel ‘‘LIFE OF LUKE AND KELLY’, there are about 102k subscribers. As on his Instagram account ‘@kellywakasa’, he has gained over 129.8k followers. Similarly, his Twitter account ‘@KellyWakasa’ has garnered 10.3k followers.

On TikTok, he goes under the name ‘@kelwak’ and has earned over 853.2k fans and more than 22.3 million likes. He has also given his Snapchat ‘@kellywakasa’.

Our contents are created by fans, if you have any problems of Kelly Wakasa Net Worth, Salary, Relationship Status, Married Date, Age, Height, Ethnicity, Nationality, Weight, mail us at [email protected]