Kellyanne Elizabeth Conway is an American pollster, political consultant and pundit who served as Senior Counselor to the President in the administration of Donald Trump from 2017 to 2020 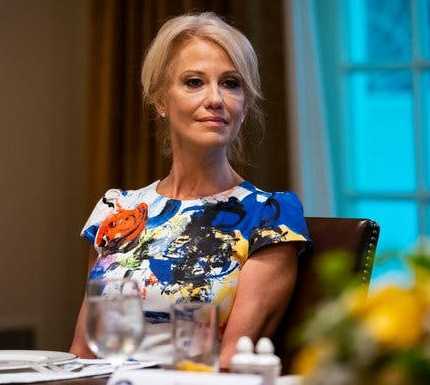 An American pollster, politician consultant, and pundit Kellyanne Conway is currently serving as a counselor to the president in the administration of U.S. President Donald Trump. Conway is the first woman to have run a successful U.S. presidential campaign to date.

What is Kellyanne Conway famous for?

When was Kellyanne Conway born?

Kellyann Conway was born on January 20, 1967, in Camden, New Jersey, the U.S. Her birth name is Kellyanne Elizabeth Fitzpatrick. Her nationality is American and she has a mixed ethnicity of Italian-Irish. Capricorn is her zodiac sign.

Conway was born in a Catholic family to Diane Fitzpatrick(mother) and John Fitzpatrick(father). Her father was a banker and trucking company owner. However, her parents separated when she was just 3.

Conway was raised by her grandmother and mother in Waterford Township. She did her schooling at St. Joseph High School. She graduated with a Bachelor of Arts Degree in Political Science from Trinity College, Washington, D.C. in 1989.

She also completed her J.D. at George Washington University Law School in 1992.

She won the title of “New Jersey Blueberry Princess Pageant” at the early age of 16 and the “World Champion Blueberry Packing Competition” title at the age of 20.

How is Kellyanne Conway’s Career?

– Kellyanne Conway started her career as a clerk in the Superior Court of the District of Columbia.

– After then she joined Wirthlin Group polling firm, Republican polling firm as a research assistant.

– She then founded her own firm and became CEO of “The Polling Company Inc./Woman Trend” with her major clients as Hasbro, Vaseline, and American Express.

– She was also an advisor to Newt Gingrich in 2012 and a strong supporter of Senator Ted Cruz during 2016.

– In 2016 surprisingly, Conway was hired by Trump as one of the senior advisors in his presidential campaign thus becoming the first woman to run a political administration.

– She currently is working as a counselor of President Donald Trump.

– She has also appeared as a political commentator on CNN, Fox News, and Fox Business.

How is Kellyanne Conway’s Personal life?

Kellyanne Conway is married to her husband George T.Conway( American attorney). They married in 2001. The couple is blessed with 4 children: twins- George IV and Claudia, Charlotte Conway, and Vanessa Conway.

Prior to George, Kellyanne also dated the late Fred Thompson.

The family currently lives happily in their Alpine mansion in New Jersey.

What is the net worth of Kellyanne Conway?

The popular star, Conway has an estimated net worth of $40 million as of 2019. Conway has accumulated a huge sum of money from her career such that she is marked as one of the highest-paid staff in the Trump administration.

She is living a great luxurious life as her husband also has a great income.

How tall is Kellyanne Conway?

Kellyanne Conway has a well maintained slim body figure. She stands tall with a height of 5ft. 7inches(1.68m). She has a bodyweight of 60kg(132 pounds).

She has a body measurement of (37-26-37)inches with her bra size of 34c and a dresses size of 8 US. She has a fair complexion with brown eyes and blonde hair.

Our contents are created by fans, if you have any problems of Kellyanne Conway Net Worth, Salary, Relationship Status, Married Date, Age, Height, Ethnicity, Nationality, Weight, mail us at [email protected]