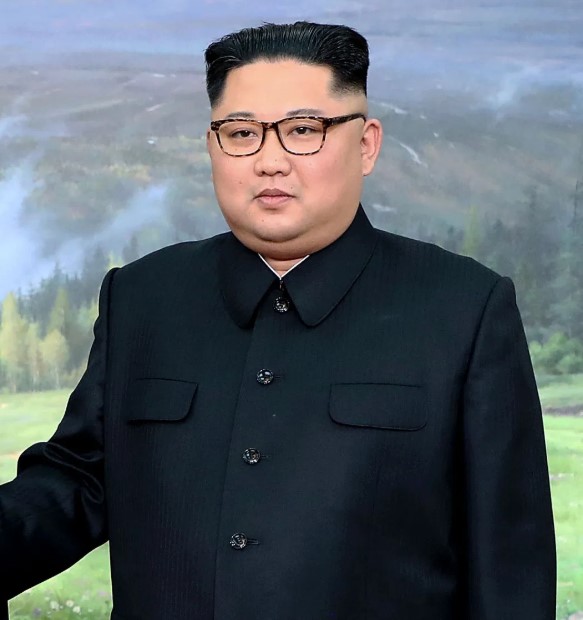 Kim Jong-un is a North Korean politician who has been serving as the Supreme Leader of North Korea since 2011 and as chairman of the Workers’ Party of Korea since 2012. Kim is the Dictator of North Korea and is considered as one of the strongest dictators that the world ever had. He is the blood of leader and founder, Kim II-Sung(grandfather), and second leader, Kim Jong-il (father). He also ranks in the list of one of the most powerful people in the whole world.

Kim even ordered the execution of his uncle Jang Song-thaek for “treachery” and is widely believed to have ordered the assassination of his half-brother, Kim Jong-nam, in Malaysia in February 2017. His regime is said to have dominated every aspect of its citizens’ lives and terrorizes them from within. He made his first TV show appearance on NBC Nightly News with Lester Holt as “Himself” in 2010. He is also nicknamed as Little Rocket Man, Fatty #3, Yongmyong-han Tongji.

What is Kim Jong-un Famous for?

Recently, Kim Jong-un has warned North Korean authorities to prepare for the dangers posed to the country by the coronavirus pandemic and a looming typhoon. North Korea has not confirmed any Covid-19 cases and it is thought that a large outbreak would have a devastating effect on the impoverished nation. But Typhoon Bavi is expected to hit North Korea later this week. Speaking at a meeting of the politburo on Tuesday, Mr. Kim, who was smoking a cigarette, said there were “some shortcomings” in the state’s efforts to keep out the “malignant virus”, state media reported, without giving details. Suspecting coronavirus, there had been lockdown in one border city near South Korea but the infection was never officially confirmed. His appearance came amid rumors about his health and that he had delegated some of his authority to his sister Kim Yo-jong. The BBC’s weather center is predicting storm surges of between 200-300mm of rain just weeks before the autumn rice harvest. Ten million people are said to suffer from food insecurity in North Korea, according to the UN. That means they live from harvest to harvest. They cannot afford more crops to be damaged.

Where was Kim Jong-un Born?

Kim Jong-un was born on January 8, 1983 (South Korean records), and on January 8, 1984 (American records) in Pyongyang, North Korea. The reason behind his changed birth year is considered to be for symbolic reasons as 1982 born would be 70 years after the birth of his grandfather, Kim Il-sung, and 40 years after the official birth of his father Kim Jong-il. His birth name is Kim Jong-un. His nationality is Korean. Kim belongs to Korean ethnicity while Capricon is his zodiac sign.

Kim Jong-un was born in a highly reputed family as the second and the youngest child of Kim Jong-il (father)(1941–2011) and Ko Yong-hui (mother)(1952–2004). His father was North Korea’s second leader who ruled the country from 1994 until his death in 2011 while his mother was the North Korean supreme leader.

Jong-un is the grandson of Kim Il-sung, who was the founder and led North Korea from its establishment in 1948 until his death in 1994.

He has two siblings: an elder brother, Kim Jong-Chul(b. 1981), and a younger sister, Kim Yo-jong(b. 1987). All of them lived in Switzerland, where Jong-un attended the Liebefeld Steinhölzli state school in Köniz, under the name “Pak-un” or “Un-pak” from 1998 until 2000 as the son of an employee of the North Korean embassy in Bern.

He first attended a special class for foreign-language children and later attended the regular classes of the 6th, 7th, 8th, and part of the final 9th year, leaving the school abruptly in the autumn of 2000. He also has half-siblings from his father’s previous relation: Kim Jong-nam and Kim Sul-song.

Who is Kim Jong-un Married to?

Kim Jong-un is a married man. Jong-un is married to Ri Sol-ju. Ri is the current First Lady of North Korea, she also has accompanied Kim Jong-un to public appearances for several weeks prior to the announcement. The couple got married in 2009 after Jong-un’s later father suffered a stroke in 2008.

Besides, Kim previously suffered from hypertension and even had gained over 30kg in body fat over the previous 5 years. On April 20, 2020, it was reported that Kim Jung-un had not been seen in public for a week after he had his heart surgery earlier supposing him to be in grave danger by CNN.

What is the Net Worth of Kim Jong-un?

The 37 years old Kim Jong-un is one of the richest people in the whole world and the most protected person in the world. As a dictator of North Korea, Jong-un has managed to rule his country with his own rules and regulations that no other country in the world has. Belonging to a family of the leader of North Kore, Jong-un has managed to be a billionaire with his whopping net worth of around $5 billion.

His billion worth assets and bank accounts were found in more than 200 foreign bank accounts located throughout the world in countries including Austria, Lichtenstein, Russia, Singapore, China, Switzerland, and Luxembourg. Kim is said to have 20 luxury palaces and mansions around North Korea for his personal use.

Kim Jong-un needs to use his money to ensure that he stays in power. That means buying military hardware and paying assassins to track down family members. As North Korea has been blacklisted and sanctioned nearly into oblivion, it has few trading partners. But that doesn’t mean it’s completely cut off. North Korea earns the bulk of its money through the sale of coal to neighboring China. Aside from that, however, the country deals with more illicit channels. Some of the ways in which North Korea pads its coffers are through weapons sales, drug manufacturing and sales, cyber-attacks, and even slavery or forced labor.

How Tall is Kim Jong-un?

Kim Jong-un has an average body physique. He stands tall with a height of 5ft. 7inch.(1.70m) while he has a large bodyweight of 130 kg(290 lbs). He has a fair complexion with black hair and brown eyes. His haircut is pretty popular in North Korea which even has the name “Ambitious”. In 2009, the reports surfaced that Kim was diabetic and also a patient of hypertension and in September and October 2014 he took a break from appearing in public as he was reported to be suffering from an ‘uncomfortable physical condition’ by the Korean media. Later in 2015, the media speculated that he had gained weight.

Regarding his health issues, North Korean leader Kim Jong Un is reportedly in a state of coma and his sister Kim Yo-jong will be exercising de facto control over national and international matters. Several media reports on Monday (24th August 2020) said that the US is monitoring intelligence that suggests the North Korean leader is in grave danger after undergoing surgery. “I assess him (Kim Jong Un) to be in a coma, but his life has not ended,” he was quoted as saying by The Korea Herald. “A complete succession structure has not been formed, so Kim Yo-jong is being brought to the fore as the vacuum cannot be maintained for a prolonged period,” he added. “I just have to say to Kim Jong-un I wish him very good luck.. I mean, they came out with very, very serious medical reports. Nobody’s confirmed that. It’s was CNN that came out, so when CNN comes out with a report I don’t place too much credence in it,” Trump said.

Our contents are created by fans, if you have any problems of Kim Jong-un Net Worth, Salary, Relationship Status, Married Date, Age, Height, Ethnicity, Nationality, Weight, mail us at [email protected]