Kumar Rocker is an American baseball pitcher who currently plays for Vanderbilt Commodores. 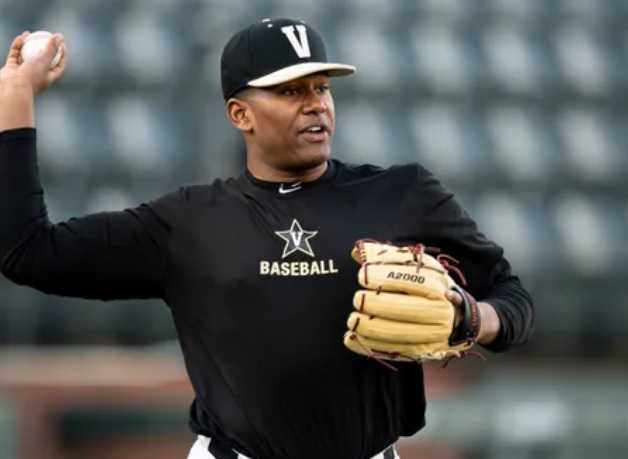 Kumar Rocker is an American baseball pitcher who currently plays for Vanderbilt Commodores. He became the first pitcher to throw a no-hitter at the 2019 NCAA Divison/ Baseball Tournament on June 8.  He was also honored as the 2018-19 Georgia Baseball Player of the year.

What is Kumar Rocker famous for?

– Famous as an American baseball pitcher.

When was Kumar Rocker born?

Kumar Rocker was born on 22nd November 1999 in Montgomery, Alabama, US. His birth name is Kumar Rocker. American is his nationality. He has a mixed ethnicity of African-Indian.  Sagittarius is his zodiac sign.

He was born to Tracy Rocker(father) and Lalitha Rocker(mother). His father was an Ameican football player on the NFL team who is the defensive line coach at the University of Tennesse at present.

He is the only child of his parents. His uncle, David Rocker was also a defensive tackle with the NFL team. His maternal grandparents immigrated to the US from India.

He was raised in Bogart, Georgia. He did his schooling at North Oconee High School. At present, he is studying at Vanderbilt University.

How is Kumar Rocker’s career?

– Kumar Rocker started his professional baseball career as a junior player in 2017. He played in the “Under Armour All-America Baseball Game”. He also played in “Perfect Game All American Classic”.

– In 2018, he went to Vanderbilt University to play college baseball. Although he became one of the top prospects for the 2018 Major League Baseball draft, he wasn’t selected until the 38th Round by Colorado Rockies.

– Then, later he got the opportunity to play at Vanderbilt. He has also played for the USA Baseball 18U National Team.

– Recently, on 8th June 2019, he became the first pitcher ever to throw a no-hitter in the Super Regional Round of 2019 NCAA Divison Baseball Tournament where he threw 19 strikeouts as Vanderbilt Beat Duke by 3-0.

– Rocker has also been named a Rawlings-perfect Game and 1st Team All-American, also he was honored as the 2019-18 Gatorade Georgia Baseball Player of the year during his school days.

How is Kumar Rocker’s personal life?

The baseball player, Kumar Rocker is unmarried. At present, he is not dating anyone. He seems to be focusing more on his career than his personal life.

What is the net worth of Kumar Rocker?

Kumar Rocker has an estimated net worth of $150k USD and his salary is $12K USD in 2019. The baseball player has good earning from his profession.

How tall is Kumar Rocker?

The 19 years aged, Rocker has a good body physique with a height of 6ft 4inches(195cm) and a bodyweight of 115kg(255 lbs). He has a dark complexion with black hair and brown eyes.

Our contents are created by fans, if you have any problems of Kumar Rocker Net Worth, Salary, Relationship Status, Married Date, Age, Height, Ethnicity, Nationality, Weight, mail us at [email protected]