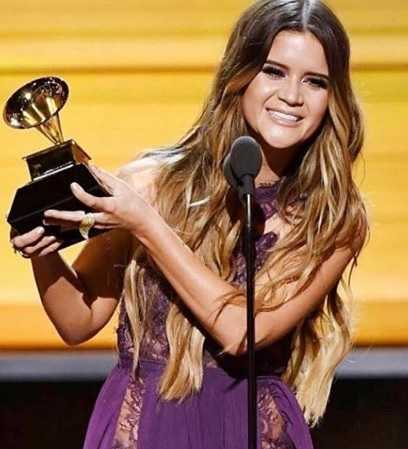 Maren Larae Morris, popularly known as Maren Morris is an American country music singer, songwriter, and record producer. She rose to prominence after she released her debut single, “My Church”, for which she has won a Grammy Award for Best Country Solo Performance. She has also won 2016 CMA Awards for New Artist of the Year, 2017 ACM Awards for New Female Vocalist of the Year, 2017 Radio Disney Music Awards for Best New Country Artist, 2018 Billboard Music Awards for Top Country Female Artist, and several other nominations.

Morris was born on 10 April 1990. Her birth name is Maren Larae Morris. She was born to Greg Morris and Kellie Morris. She was born in Arlington, Texas. She holds an American nationality. She has a younger sister named Karsen Morris. Her father bought her a guitar when she was 12-years old. Her zodiac sign is Aries. She follows Christianity. She attended the University of North Texas.

The career of Maren Morris

In 2015, she released an eponymous EP, Maren Morris. The album garnered her major recognition.

Following her success with EP, Maren Morris, she signed a record deal with Columbia Nashville in September 2015.

In November 2015, she re-released the EP with “My Church” as the lead single.

The EP charted at number two on Billboard charts, number one on The Heatseekers chart, and at number 27 on the Country Album chart.

Her single, “My Church” won her Grammy Award for Best Country Solo Performance in 2017.

In 2016, her major-label debut album, Hero was released 2016, which received critical acclaim.

She was named Billboard Women in Music 2016 with the Breakthrough Star Award and Music Biz also awarded her Breakthrough Artist Award in 2017.

She released a deluxe edition of Hero in March 2017, featuring songs “Bummin’ Cigarettes”, “Space”, and “Company You Keep”.

She wrote the song “Dear Hate” in a response to the 2017 Las Vegas Strip shooting.

She will be one of the performers at Brandi Carlile’s upcoming music festival, Girls Just Wanna Weekend, scheduled to take place in January 2019.

Maren Morris is a married woman. She is married to fellow country singer Ryan Hurd. They got married on 24 March 2018 in Nashville, Tennessee. She first met him in a co-write back in 2013. They started dating in December 2015. In July 2017, they got engaged. She lives with her husband in Nashville, Tennesse at present.

Net Worth of Maren Morris

Maren Morris is a singer, songwriter, and record producer. Her sole source of income is music. As of 2018, her net worth is estimated at $2 million.

Our contents are created by fans, if you have any problems of Maren Morris Net Worth, Salary, Relationship Status, Married Date, Age, Height, Ethnicity, Nationality, Weight, mail us at [email protected]