Melania Trump, the present First Lady of the United States, wife of the 45th U.S. President. 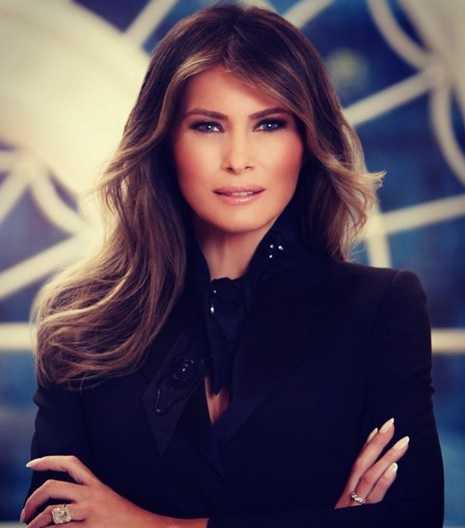 The First Lady Melania Trump visited the New Hope Children’s Shelter in McAllen, Texas wearing an “I really don’t care, do you?” jacket on 21 June, this year, which drove lots of attention all over. Being the First Lady, she was criticized for wearing such a controversial jacket. Back then, Donald Trump said it was a message to the “Fake News Media”. her communications chief claimed that it was just a jacket and had no hidden message.

However, the First Lady clarified in an interview with ABC news released on Saturday that it was a kind of a message. Melania claimed she is one of the most bullied people in the world. She said, “It was for the people and for the left-wing media who are criticizing me. I want to show them I don’t care. You could criticize whatever you want to say. But it will not stop me to do what I feel is right.”

Mrs. Trump urged the media to focus on her initiatives rather than what she wears.

Melania was born on 26 April 1970 in Novo Mesto, Slovenia. She was born as a daughter of Viktor Knavs and Amalija. She has an older sister named Ines and older half-brother. Melania used to participate in fashion shows that featured children’s clothing, manufactured in the factory, where her mother used to work. Melania grew up in Sevnica in the Lower Sava Valley and was raised Catholic. Melania attended the Secondary School of Design and Photography in Ljubljana. She then attended the University of Ljubljana, where she studied architecture and design. But, she dropped after completing a year.

Melania pursued her career in modeling at the age of sixteen. She posed for the Slovenian fashion photographer Stane Jerko. She then transcribed the Slovene version of her last name “Knavs” to the German version “Knauss”. At the age of eighteen, Melania signed with a modeling agency in Milan, Italy. Melania was named 1992 “Look of the Year” runner-up by the Jana Magazine. Melania met Metropolitan Models co-owner Paolo Zampoli in 1995, who suggested her to come to the United States to represent her. Melania moved to Manhattan in 1996 and began her modeling career in the United States. Melania started her own business in jewelry in 2010. She started Melania Timepieces and Jewelry. She also marketed a Melania Skin Care Collection. Those products were sold in high-end department stores. Both the jewelry and skin care products manufacturing companies terminated their relationship with Melania in 2017. Melania undertook the role of First Lady of the United States on 20 January 2017 after his husband, Donald Trump became the 45th President of the United States.

Melania met then real estate emperor Donald Trump in 1998. Their relationship started since then. The love couple got engaged in 2004. A year later, they tied a knot with each other on 22 January 2005, in an Anglican service at The Episcopal Church of Bethesda-by-the-Sea in Palm Beach, Florida. However, it was Trump’s third marriage and her first. Melania wore a dress worth $200,000 designed by John Galliano of the house of Christian Dior. A number of famous celebrities attended their wedding ceremony. Their wedding became one of the popular events in the United States then and was widely covered by the media. The couple has a son together named Barron William Trump, born on 20 March 2006.

At present, they live in White House in Washington, D.C.

Melania can Slovene, English, and Serbo-Croatian language, Slovene being her native language. Trump claimed she can speak French, Italian, and German as well.

The 48-year old First Lady, Melania stands 5 feet 11 inches tall. She is one of the tallest First Ladies of United States. Her height ties with Michelle Obama and Eleanor Roosevelt.

The net worth of Melania Trump is reportedly estimated over $50 million. She was one of the successful models in Europe. She moved to the United States, where her fortune flourished even more. At present, she is the First Lady of the United States and the wife of billionaire husband, Donald Trump.

Our contents are created by fans, if you have any problems of Melania Trump Net Worth, Salary, Relationship Status, Married Date, Age, Height, Ethnicity, Nationality, Weight, mail us at [email protected]