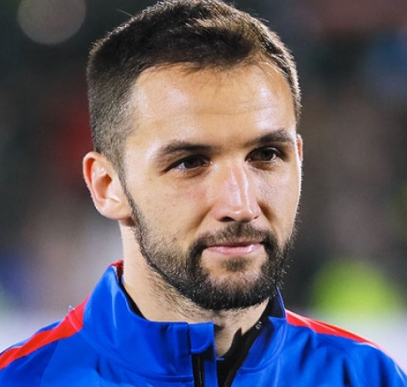 One of the popular professional football players is named Milan Badelj who plays for the Italian Football Club, Fiorentina, and the Croatian National Team. He is well known Croatian celebrity. He is famous for his contribution to professional life. He is best at defensive midfielder. He is also the best midfielder. Currently, he is playing in Fiorentina. He had played for Ponikve, NK Zagreb, and many more. He is right foot player. His Shirt number is 19. Sime Vrsaljko is one of his best teammates. He is representing himself in Russia for the World Cup 2018 as a part of the Croatian team by showing his talent to all.

Passionate and enthusiastic player, Milan Badelj was born on 25th February 1989. He was born and raised in Zagrev, Yugoslavia. He is the son of Ratko Badelj and Slavica Badelj, his father and mother. His nationality is Croatian. His astrological sign is Pisces. He was very much interested in football since childhood. His hard work, striving got him picked for the youth systems of Croatian football clubs such as Ponikve, NK Zagreb, and more.

Concerning his body, his height is 1.86 m. His weight is 76 Kg. He has a balanced body with good health.

Milan Badelj joined the main team in 2007, after playing for the junior team of Dinamo Zagreb. In 2008, he made his main team senior debut against Linfield during the Champions League qualifier. Again he made his national debut in the opening match of the 2008/2009 seasons against the club, Rijeka with the victory of 2–0 by scoring the first goal.

He was also part of a successful team that went on to win the Croatian First League multiple seasons, the Croatian Cup on several occasions, and the Croatian Super cup in 2010, too.

Then, he was transferred to Lokomotiva, a Croatian football club as part of the loan deal from Zagreb for the 2007/08 seasons.

Later, in August 2012, he joined the German football club, Bundesliga club, Hamburger SV. He has reported a transferred fee of €4.5 million. In November 2012, Milan made his debut national against Werder Bremen and scored his first goal against Schalke 04.

Now, he is currently playing for the Italian football club, Fiorentina. He was transferred at a fee of around €5 million in 2014.

Milan Badelj represented himself in his national country, Croatia in both senior as well as junior levels in many tournaments. He made his senior debut for Croatia in 2010. He has won a total of 63 caps for his national side. He was also selected for UEFA Euro 2012 and 2016. In addition to this, his name was also enlisted in FIFA World Cup 2014

Milan Badelj is an unmarried man but he is in a relationship with his girlfriend named Martina, who is a student at the Zagreb Academy of Music. They seem to be very happy with each other with no signs of separation.

The net worth of Milan Badelj is estimated to have $9 million in 2018 with all of his properties and incomes. He is receiving an annual salary of € 3.6 million from his present club and his weekly salary is € 71,000. He has a market value of € 15 million as of June 2018.

Our contents are created by fans, if you have any problems of Milan Badelj Net Worth, Salary, Relationship Status, Married Date, Age, Height, Ethnicity, Nationality, Weight, mail us at [email protected]