Miley Cyrus is an American singer, songwriter, and actress 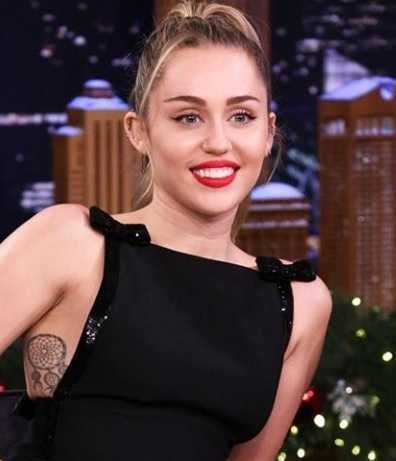 Miley Ray Cyrus, popularly known as Miley Cyrus is an American singer, songwriter, and actress. Her birth name is Destiny Hope Cyrus. She rose to prominence after she played the role of Miley Stewart on the Disney Channel television series, Hannah Montana. Her three albums, Meet Miley Cyrus, Breakout, and Bangerz earned number one on the US Billboard 200. She made her film debut as a voice actress in the animated film Bolt in 2008. MTV recognized her as “Artist of the Year” in 2013. Time 100 list included her as the most influential people in 2008 and 2014. She transitioned from her wholesome image to a highly-sexual persona in the early 2010s, which became a significant public subject of controversy.

On December 23, Miley Cyrus and Liam Hemsworth reportedly got ‘married’ in a private ceremony, at their $5.8 million mansions in her hometown, Franklin, Tennessee. The rumors flew after a photo of the couple cutting a possible wedding cake in their kitchen in front of their guests appeared online. It is not official yet. However, by the looks of a ceremony organized and the guest appeared on the ceremony reportedly hints that the couple has finally tied a knot to each other.

The ceremony is attended by Cyrus’s mother and Hemsworth’s brothers and sisters as well. The couple tackled through an on-and-off relationship in 8 years. They started dating in 2010. They called off their engagement once in 2013 and got re-engaged in 2016.

Miley Cyrus was born with the name Destiny Hope Cyrus on 23 November 1992. She was born to Billy Ray Cyrus and Leticia Jean Cyrus. Her birthplace is Franklin, Tennessee, in the United States. She has two siblings, brother Braison and sister Noah. She has a half-brother Trace and half-sister Brandi from his mother’s previous relationship, and a half-brother Christopher from his father’s previous relationship. Her siblings, Trace is a vocalist and guitarist of Metro Station, Noah is an actress and singer, Braison as a fashion model, and Bandi is a journalist. She follows Christianity. Her zodiac sign is Sagittarius.

She attended Heritage Elementary School. She enrolled at Options for Youth Charter Schools and studied with a private tutor on set while working on Hannah Montana.

The career of Miley Cyrus

At the age of 8, Miley and her family moved to Toronto, Ontario, Canada. Her father filmed the television series Doc. Her desire to become an actress grew after seeing his father took her to see a 2001 Mirvish production of Mamma Mia! at the Royal Alexandra Theatre.

Her first role in acting landed in a minor role of Kylie in the television series Doc.

She became the “Teen Idol” after the instant success of the series.

She has appeared in the two episodes of the CBS sitcom Two and a Half Men.

She co-starred in Crisis in Six Scenes in September 2016.

Her first EP The Time of Our Lives 2009, third studio album Can’t Be Tamed 2010, and sixth studio album Younger Now 2017 debuted in the top-five in the United States.

Her fifth studio album Miley Cyrus & Her Dead Petz was released for free online streaming on SoundCloud in 2015.

She has also appeared as a coach in two seasons of the singing competition television series, The Voice.

The theatrical release of the 3D concert film Hannah Montana & Miley Cyrus: Best of Both Worlds Concert was released in 2008.

She became the youngest performer in history to have four number-one albums on the Billboard chart.

She performed for Queen Elizabeth II and other members of the British Royal family at the Royal Variety Performance in Blackpool, Lancashire in December 2009.

In 2009, Billboard ranked her as the fourth best-selling female artist.

The music video of “We Can’t Stop” became the first to reach 100 million views on VEVO.

Miley Cyrus is currently engaged to Australian Actor, Liam Hemsworth. They have been through on and off relation 2010 to till date. They started dating while filming the 2010 film The Last Song. They first got engaged in May 2012. Her representative announced that Miley and Hemsworth decided to call off their engagement in September 2013. The two worked out their relation in March 2016. She announced in October 2016 that she was once again engaged to Hemsworth.

Net Worth of Miley Cyrus

The net worth of Miley Cyrus was estimated at $200 million in 2017.  She has earned over $201 million from sold-out concerts and $76 million from endorsements. She launched her first fashion line, Miley Cyrus and Max Azria through Walmart in 2009.

Our contents are created by fans, if you have any problems of Miley Cyrus Net Worth, Salary, Relationship Status, Married Date, Age, Height, Ethnicity, Nationality, Weight, mail us at [email protected]