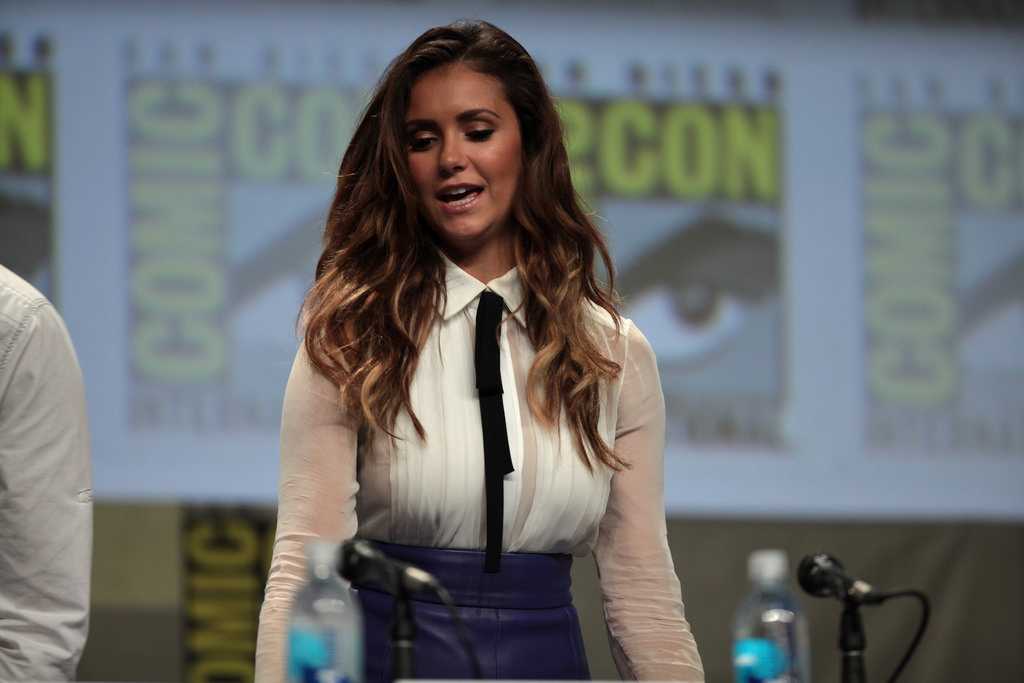 A Bulgarian born Canadian actress Nikolina Konstantinova Dobreva, known as Nina Dobrev was born on January 9, 1989 in Sofia, Bulgaria. Now she is living in Los Angeles, USA. She started acting career through a drama series Degrassi: The Next Generation, but came to the limelight after portraying Elena Gilbert in supernatural drama series The Vampire Diaries by The CW. Dobrev has also featured in some of the movies like The Perks of Being a Wallflower in 2012, action comedy Let’s Be Cops in 2014, horror comedy The Final Girls in 2015, action thriller xXx: Return of Xander Cage in 2017 and science fiction movie Flatliners in 2017. Her new movie Run This Town directedby Ricky Tollman is scheduled to be released in 2019. Dobrev can speak English, French and Bulgrian fluently.

Nina Dobrev was born in Sofia, Bulgaria and immigrated to Canada with her parents. Dobrev was raised with her older brother, Aleksandar Dobrev by her father, Konstantin Dobrev a computer specialist and her mother, Mihaela Dobbrec, an artist. Dobrev schooling started from Vradenburg Junior Public School and studied at J.B Tyrrell Sr. Public School later. She started ballet and jazz classes and also competed in rhythmic gymnastics from J.B. Tyrrell Sr. Public School. Dobrev pursuited her acting clases at Armstrong Acting Studios in Toronto and attended arts program until graduation at wexford Collegiate School for the Arts in Scarborough. Later, Dobrev joined post secondary at Ryerson University in Toronto majoring in Sociology. But interest in acting career denied Dobrev from graduation.

The teen drama television series Degrassi: The Next Generation starting 2006 featured Dobrev as a role of Mia. It was her first major acting role to start the career with. Dobrev was featured in that tv series for three season. She also appeared in several feature films in between like Fugitive Pieces and Away from Her, television films like Never Cry Werewolf, The American Mall and two original movies. She also played in the “You Got That Light” music video by Wade Allain-Marcus and David Baum. In 2009, Dobrev left Degrassi to star in supernatural drama series The Vampire Diaries by The CW. Its a television adaptation of the same named book series. Dobrev played the lead role of Elena Gilbert. Dobrev also featured as a doppleganger of Elena on the series as Katherine Pierce. She also played in The Originals, the Vampire Diaries spin off as doppleganger character Tatia. Dobrev left The Elena character in Vampire Diaries plyaing for six seasons in 2015 and announced comeback in January 2017 in season finale. Vampire Diaries brought Nina Dobrev more into the limelight.
Besides The Vampire Diaries series, Dobrev also played minor role in both erotic thriller movie Chloe, released in 2010 and The Roommate in 2011.Dobrev was casted int The Perks of Being a Wallflower For a role of Candace Kelmeckis in April 2011. Other cast of the movies were Logan Lerman, Emma Watson and Paul Rudd. Dobrev also acted in action comedy movie Let’s Be Cops alongside Jake Johnsom and Damon Wayans Jr. by 20th Century Fox in August 2014. Dobrev appeared 2015 horror comedy movie The Final Girls playing the role of VIcki Summers. In September 2015, Dobrev, Asa Butterfield and Game of Thrones star Maisie Williams casted movie Arrivals was renamed Departures later by the production team before going into production. Dobrev casted in romantic comedy Crash Pad in the same year alongside Domhnall Gleeson and Christian Applegate.Opposite to Fast and Furious star Vin Diesel, Dobrev co starred in the action film sequel xXx: Return of Xander Cage in 2017. Other casts were Samuel L. Jackson and Bollywood star Deepika Padukone. Dobrev played a role of weapons specialist Becky Clearidge opposite to Vin Diesel. Dobrev was co-starred in Flatliners as a role of Mario opposite to Ellen Page in 2017. Dobrev was casted in the role of Clem in the comedy based movie Fam in March 2018, which was later televised to a series in May 2018. Dobrev has a Cameo appearance in music video song “I’m Upset” by Drake.

Nina Dobrev’s Net Worth and Salary

Nina Dobrev is a very attractive and smart personality in Hollywood industry. She is a well known Canadian actress and model who is much famous for her brilliant acting as well as exceptional looks.Nina Dobrev was paid 30000 $ per episode. Her net worth is currently around 6 million.Film and Television is the main source of Wealth.

Our contents are created by fans, if you have any problems of Nina Dobrev Net Worth, Salary, Relationship Status, Married Date, Age, Height, Ethnicity, Nationality, Weight, mail us at [email protected]