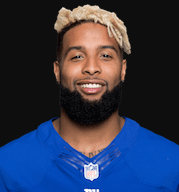 Odell Cornelious Beckham Jr., professionally known as Odell Beckham Jr. or OBJ is an American football player. He plays as a wide receiver for the Cleveland Browns of the NFL. Earlier, the New York Giants drafted him with the 12th overall pick in the first round of the 2014 NFL Draft. He played college football at Louisiana State University.

What is Odell Beckham Jr Famous For?

Where was Odell Beckham Jr Born?

Odell Beckham Jr. was born on 5 November 1992. His birth name is Odell Cornelious Beckham Jr. His birthplace is in Baton Rouge, Louisiana in the United States. He holds American nationality. He was born to a father, Odell Beckham Sr., and a mother, Heather Van Norman. He has two siblings Jasmine and Kordell. His zodiac sign is Scorpio.

He attended Isidore School in New Orleans, Louisiana. He was a letterman in football, basketball, and track. He is the second player in school history to record 1,000 receiving yards in a season. He was named to the Time Picayune 2011 Blue-Chip list and to the Louisiana 2A All-State first team. He also earned District 9-2A Offensive MVP honors and a spot on the Advocate’s Super Dozen. He was an all-district selection in his junior and senior years. He excelled in the sprinting and jumping events as well. He also played soccer growing up. Rivals.com and Scout.com rated him as a four-star recruit.

The New York Giants selected him with the 12th overall pick in the first round of the 2014 NFL Draft. He signed a contract with the Giants in May 2014.

He missed the preseason and the first four games of the season due to a hamstring injury.

He made his NFL debut against the Atlanta Falcons in October 2014. He recorded 4 receptions for 44 yards and a touchdown in his NFL debut.

His one-handed touchdown reception against the Dallas Cowboys in November 2014 was hailed as the “catch of the year”.

He posted a career-high 185 receiving yards in the regular-season finale against the Philadelphia Eagles. He set the franchise record by a rookie in doing so.

He won numerous accolades for his performance in his rookie season.

Sportswriter hailed Beckham as one of the greatest ever rookie.

He recorded 96 receptions, 1,450 yards, and 13 touchdowns in 15 games in the 2015 season. NFL Disciplinary Committee suspended him one game without pay for multiple violations of safety-related playing rules.

He was selected to Pro Bowl for the second year in a row.

The Giants earned a wild-card spot and returned to the playoffs for the first time since 2011, where they lost to the Green Bay Packers. He punched a hole in the wall in the visiting teams’ locker room due to frustration after the loss. The Giants later paid for the damages.

He was named to the Pro Bowl for the third year in a row.

He recorded 25 receptions, 302 yards, and 3 touchdowns. He played only 4 games in the 2017 season due to injury. He missed most of the season due to the fractured left ankle. He underwent surgery to repair the fracture.

He signed a five-year contract extension worth $95 million with $41 million fully guaranteed with a $65 million in guarantees with the Giants in August 2018.

He returned from injury in the 2018 season-opener against the Jacksonville Jaguars.

Most receiving yards in a season, rookie: 1,305

Most receptions in a game, any position, rookie: 12 (tied with Mark Bavaro)

Most games with 10+ receptions, rookie, season: 4

Most receptions at home, rookie, season: 52

The Giants traded him to the Cleveland Browns in March 2019.

Most games with 125+ receiving yards in first three seasons (13)

Most receptions in the first 15 games of career: 110

Most consecutive games with 90+ receiving yards: 9 (2014, tied with Michael Irvin)

Most games with 10+ receptions, rookie, season: 4

Most receptions at home, rookie, season: 52

Most receiving yards in any calendar month, rookie: 606 yards (December 2014)

Only player in NFL history to have 1,300+ receiving yards while playing in 12 or fewer games in a season

Who is Odell Beckham Jr Dating?

Odell Beckham has maintained a low profile regarding his personal life. He was romantically linked with Amber Rose in 2015 and Zendaya and Khloe Kardashian in 2016. He was also rumored to be dating Bella Hadid in 2016 but neither of them has confirmed the rumor.

How tall is Odell Beckham Jr.?

What is Odell Beckham Jr Net Worth?

Odell Beckham Jr. earns from his professional NFL career. His income comes from salary, bonuses, contracts, and endorsements. He signed the largest endorsement in NFL history with Nike worth $25 million for five years in May 2017. The deal can be pushed up to an eight-year worth $48 million if Beckham meets all of his incentives. He also has sponsorship deals with Head & Shoulders, Foot Locker, and Lenovo. His net worth is estimated at $25 million.

Our contents are created by fans, if you have any problems of Odell Beckham Jr Net Worth, Salary, Relationship Status, Married Date, Age, Height, Ethnicity, Nationality, Weight, mail us at [email protected]