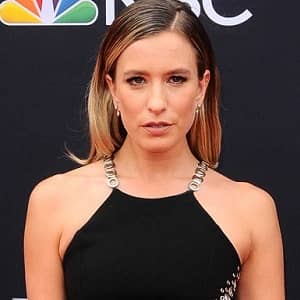 Renee Satterthwaite is the ex-wife of David Portnoy. Her ex-husband is an internet celebrity and blogger best known as the founder of ‘Barstool Sports’.

Renee Satthertwaite was born on 5th May 1987 in Nantucket, Massachusetts, the United States of America. As of 2021, her age is 33. There is no information about her parents. Similarly, she has not revealed anything about her siblings and her family members.

Regarding her education, she earned her graduation in International Relations and business(B.S.C) at Boston University.

Where is Renee Sattherthwaite now? What does she do for a living?

Renee is an Equine Buyer. In 2010, she started working at Smart Pak Equine, a company which provided horse supplies and supplements as an assistant buyer. Currently, she is working there as   Director of Merchandising.

A known animal lover, she is often seen posting pictures with animals, mainly dogs and horses. She and Dave often visited the Kentucky Derby together and own several horses. Moreover, she also attends several horse riding events.

Satterthwaite is a social activist and advocate for pets. Similarly, she also promotes animal welfare and raises charities for animal shelters. Currently, the beautiful lady is working at Nantucket Island Safe Harbor for Animals (NISHA) as a part of the board of directors.

A Short Description of her ex-husband, David Portnoy

David Portnoy is an American internet celebrity and blogger. He is famous as the founder of the sports and pop culture blog, ‘Barstool Sports’. On January 7, 2016, David announced The Chernin Group had purchased a majority stake of his company and the headquarters would be moving to New York City.

In 2020, Penn National Gaming purchased a 36% stake in the company for $163 million. After the sale, Portnoy continued to run the site and retained creative control over content.

In July 2020, he interviewed President Donald Trump at the White House which has been a subject of controversy within Barstool Sports as their podcast host publicly criticized the interview.

Renee Sattherthwaite was married to David Portnoy. The couple dated for a while before exchanging wedding vows in 2009. Portnoy gained fame as the founder of Barstool and Renee was called ‘the First Lady of Barstool’ by their fans.

The couple separated after around 8 years of marriage in 2017. He also announced that he was in a relationship with Jordyn Hamilton after their separation.

Currently, Renee seems to be single and happy.

What is the Net Worth of Renee Sattherthwaite?

Renee Sattherthwaite has an estimated net worth of around $2.5 million. Her annual salary is estimated at over $250000 as of 2021.

Sattherthwaite stands at a height of 5 feet 7 inches and weighs around 55 kg. She has attractive body measurements of 34-24-35 inches for breasts, waist, and hips. She has brown hair color and a pair of brown eyes.

Our contents are created by fans, if you have any problems of Renee Satterthwaite Net Worth, Salary, Relationship Status, Married Date, Age, Height, Ethnicity, Nationality, Weight, mail us at [email protected]