Robert Glenn "Robbie" Lawler famed as Robbie Lawler is a former UFC Welterweight Champion who is famous with his octagon name Robbie (Ruthless). 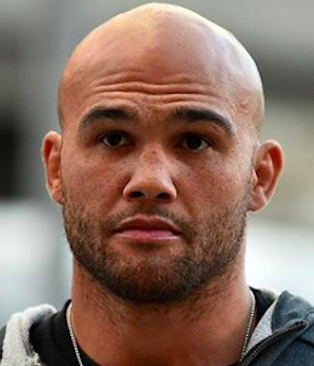 It's about being able to go through the grind, willing to get back up when you're knocked down. ...

You really can't worry about stuff you can't control... ...

Even in the losses, I always saw glimpses of something that kept me going.

Robert Glenn “Robbie” Lawler famed as Robbie Lawler is a former UFC Welterweight Champion who is famous with his octagon name Robbie (Ruthless). He is one of the prominent mixed martial artists. He became the UFC Welterweight champion by defeating another superstar Johny Hendricks who had fought Georges St-Pierre in a very close match. As of 22nd July 2019, he is #11 in the official UFC welterweight rankings. Overall, he is a very talented person.

After steamrolling Robbie Lawler, Colby Covington’s day of reckoning is near

Covington was going places athletically but stuck in neutral through most of his UFC career until he found a voice, though not exactly a unique one. When he speaks, you can hear his influences: a dose of Chael Sonnen, a dash of Ric Flair, a few dollops of Sean Hannity. The recipe is as obvious as it is over-seasoned. But that is the whole point for Covington. He wants opponents and fans alike to feel overwhelmed. Your anger is his pursuit. Hate is an easy emotion to spark. What does he do in the cage? Not so easy. Last night at UFC on ESPN 5 in Newark, New Jersey, Covington sliced through former welterweight champion Robbie Lawler in his same kind of insufferable style. “Insufferable” in the sense of overwhelming, not in the sense of the “unpleasantness” often associated with his name. With Covington, the two are easy to confuse by design. Despite a short-notice pairing, Covington fired off 541 strikes during the five-round bout, a UFC record. He jabbed and pawed and fired, and left Lawler only slivers of time to operate his usually fearsome offense. He also took Lawler down 10 times. On the judges’ scorecards, it was a shutout. It was a victory that was actually stunning in execution given the personal stakes for Covington. Following a seven-fight streak, that should be enough to cinch Covington a title shot, but he wasn’t taking any chances. Covington’s fight weeks have equally become about pomp and bluster, MMA’s most controversial showman. His “Make America Great Again” hat is his favorite accouterment, he arrives with a melange of under-dressed women, he solicits venom by co-opting Kurt Angle’s infamous “You Suck” WWE walkout music. To Covington, anything is a prop. The U.S. flag, the interim title, the First Family. Yes, the Trumps (Eric and Don, Jr.) were at Prudential Center, front-row center, to watch him fight. The President of the United States, 14 minutes after tweeting about the horrific El Paso shootings yesterday, had moved on to wishing Covington luck. He later privately congratulated Covington on his win through a phone call. Reminder: this wasn’t even a title fight! Covington has always been headed for a day of reckoning-whether glorious victory or spectacular defeat, and that day is nigh. He’s all-in, and whether you’re a Trump, whether you’re praying for Covington to win or Usman to knock his block off, it’s time to brace yourself.

Robbie Lawler was born on 20th March 1982 to Robert Glenn Lawler. As of 2019, he celebrated his 37th birthday. He was born in Parkland, Florida, the USA. He is very passionate about fighting and practiced karate since his childhood. As his father was a marine, Lawler’s interest in Martial Arts wasn’t denied by the family, and at the age of 9, he started karate training along with his elder brother. Further, he was also actively involved in wrestling and football in his school days. He attended Bettendorf High School where he received All-State honors in wrestling and football, completed his graduation in 2000. After completing high school, he signed up with Pat Miletich at the age of 16 and began training with Miletich Fighting Systems. He was associated with Miletich from 2000 till 2013 and has won many titles from his 13 years long affiliation with the camp. He was also affiliated with American Top Team from 2013 till 2016, where he trained alongside other Welterweight fighters like Tyron Woodley and Colby Covington (current interim Welterweight Champion). Currently, he is training with The Hard Knocks 365. His nationality is American and his ethnicity is Mixed. There is no information regarding his parents and siblings.

Robbie is a very handsome person with a strong and athletic body build. He has got a very charming smile on his face attracting a lot of people towards him. He has a tall height of 5 feet and 11 inches and fights at the 175lbs weight class. The South Paw fighter is known for his powerful punches, hand speed, and outstanding takedown defense techniques. Among Lawler’s several tattoos, two of them are super exciting. His lower body tattoo in his belly area reads, Gladiator, and has an image of a gladiator’s tattooed on his right arm where a gladiator is seen wearing a UFC Title belt on its waist. His other body measurements will be added soon.

The career of Robbie Lawler

Net Worth of Robbie Lawler

Robbie Lawler is a famous MMA and his career has paid him a lot of fortune. He reportedly holds a total net worth of more than $4 million as of 2019. His recent earnings from two recent fights show that his fight day salary is reportedly around $200 thousand. His fight against Donald Cerrone was reported to have earned him a sum of $320,000, with $200,000 to show up along with a $100,000 win bonus and $20,000 Reebok sponsorship. As per his recent UFC contract, he earns $200,000 per match, which is added with $100,000 as his win bonus, $20,000 Reebok sponsorship. Moreover, the performance of the night and the knockout of the night award remains at $50 thousand for all MMA fighters. He so far has earned $4,358,000 from his long and successful MMA career. Overall, he is satisfied with his earnings. He also earns from the endorsements. He is endorsed by sportswear and gear producer Addidas and promotes combat wear and gear from Addidas too which surely makes him entitled to a lot of endorsement money from Addidas.

Robbie Lawler is a married person. He was married to his long-term girlfriend turned wife Marcia Suzanne Lawler. The lovely duo together has a son. He and his spouse Marcia are living a happy life together. There is no sign of disturbances between them. They are enjoying their life a lot.

Our contents are created by fans, if you have any problems of Robbie Lawler Net Worth, Salary, Relationship Status, Married Date, Age, Height, Ethnicity, Nationality, Weight, mail us at [email protected]