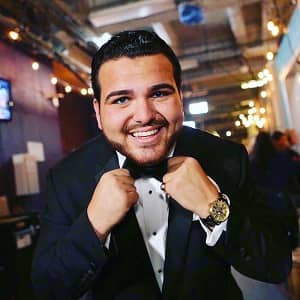 Sal Valentinetti is a famous singer from America. He is best known for earning popularity after competing in the television show “America’s Got Talent” during its 11th season. He finished the competition in 5th place and returned for America’s Got Talent: The Champions, where he was eliminated in the Preliminaries.

Where is Sal Valentinetti from?

Sal Valentinetti came to this world on the 26th of August 1995, in Long Island, New York, USA. He is American by nationality and is currently 25 years old. Talking about his family and childhood, there is very little known about his family, except for the fact that he was raised in the small town of Bethpage, New York. He discovered his passion for music to the influence of his grandmother.

How did Sal Valentinetti rise to stardom?

During the early days of Sal Valentinetti, he began his singing career by auditioning for the 14th season of “American Idol“. The show was one of the top-rated TV shows in the country and he managed to go through the auditions. Unfortunately, he couldn’t make it through the live shows. However, he did not give up and looked up for other opportunities. Alongside that, he continued to develop his singing skills.

Soon aftеrwаrd, he auditioned for ‘America’s Got Talent‘ in 2016. Sal took the show by storm with his fantastic performance of the song ‘My Way’ originally by Frank Sinatra. He even received a stand ovation and also the famous ‘Golden Buzzer‘ by Heidi Klum. Since then, he reached his stardom and has been on various tours all over the country for his singing career.

As of now, he occasionally performs at the Patchogeu Theatre as well as in The Paramount. His most famous achievement is the fifth position on the ‘America’s Got Talent’ and we can expect many more awards and nominations coming his way in the future.

How is the dating life of Sal Valentinetti?

Referring to the dating life of Sal Valentinetti, there is nothing much known about his romantic relationships. However, he was in a slightly romantic tension with “America’s Got Talent” judge Heidi Klum who selected him as her golden buzzer. The two even had notable tension with their duet performance which many stated was done in a bit of a scripted manner. Since the show, there is not even a single report regarding his relationships and rumors. Therefore, Sal is most probably single at the moment.

For his wealth and earnings, the 25-year-old jazz artist has an estimated net worth of about $3 million. He makes most of his earnings through his successful career in the music industry. Likewise, he has also appeared in other television shows and also heard in various radio programs as well. As his career continues to progress, his wealth is also sure to continue to increase. However, there is no information on his official earnings through his career.

How tall is Sal?

Physically, Sal Valentinetti stands with a height of 5 feet 4 inches and weighs about 78 kilograms. Besides this, there is information about his other body measurements such as chest-bicep-waist size and shoe size. Likewise, he has dark black hair and a pair of beautiful blue eyes.

Our contents are created by fans, if you have any problems of Sal Valentinetti Net Worth, Salary, Relationship Status, Married Date, Age, Height, Ethnicity, Nationality, Weight, mail us at [email protected]