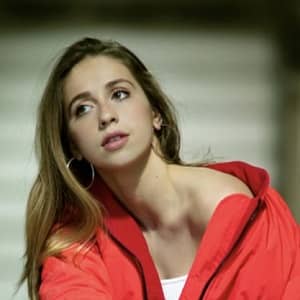 Tate McRae is a Canadian singer, dancer, voice actress, and Youtuber. She first gained fame as the first Canadian finalist on ‘So You Think You Can Dance’. She later started her career as a singer-songwriter and released her debut EP, All The Things I Never Said, in January 2020.

How old is Tate McRae?

Tate Rae was born as Tatum Rosner McRae in Calgary, Canada, on July 1, 2003. As of 2020, her age is 17. Her mother, Tanja Rosner is German whereas her father is Canadian. Tanja used to own a dance studio and is a dancer herself. She is one of her parents’ two children and has an older brother named Tucker. At the age of four, she moved to Oman with her family where her mother gave dance lessons.

In 2011, they returned to Calgary and she started doing recreational ballet training. Four years later, she started competitive dancing with Drewitz Dance Productions. Her ethnicity is German, Canadian.

Which school does Tate attend?

Tate goes to Western Canada High School as of 2020.

How did Tate McRae become famous?

Tate McRae started her competitive dancing career with Drewitz Dance Productions. In the 2013 Dance Awards, she was awarded the Best Female Dancer in the “Mini” category. The same year, she worked as a voice actress for the TV series, Lalaloopsy voicing the character, ‘Spot Splatter Splash’.

She became a brand ambassador for Capezio and in 2014, a finalist at the New York City Dance Alliance’s National Gala.

A year later, she earned a two-week scholarship at the Berlin State Ballet company after being the runner-up at the 2015 Youth America Grand Prix. In the 2015 Dance Awards, she was awarded the Best Female Dancer award for the second time.

In 2016, she performed with Justin Beiber for his Purpose World Tour and also performed on The Ellen DeGeneres Show. The year would be her breakthrough as she was introduced to a huge audience with the thirteenth season of the American reality TVshow, So You Think You Can Dance. She went on to become the first-ever Canadian finalist in the show.

In 2017, she started a “Create With Tate” video series on her Youtube channel in which she focused on original songs which she wrote and recorded. Her debut song, “One Day” became viral and gained over 32 million views which encouraged her to keep uploading more songs.

In 2019, she signed with RCA Records after which she announced her debut EP, ‘All the Things I Never Said’ in December 2019. On January 24, 2020, she released the EP and announced her first tour of Europe and North America. Elle magazine dubbed her ‘Canada’s answer to Billie Eilish’. Her debut single, “One Day” was certified Gold in Canada in April 2020.

During the Coronavirus lockdown, she released the single “You Broke Me First” from her upcoming EP.

What is Tate McRae’s Net Worth?

Tate McRae has an estimated net worth of over $630k as of 2020. Her main sources of income include singing, dancing, and her Youtube channel which has over 2.3 million subscribers.

How tall is Tate McRae?

Tate stands at a height of 5 feet 8 inches and weighs around 59 kg. Her body measurements for breasts, waist, and hips are 34-25-35 inches. She has brown hair and a pair of brown eyes.

Does Tate McRae have a boyfriend?

As of 2020, Tate seems to be single. She has not mentioned anything about her dating anyone and has not revealed any of her past affairs. McRae seems to be focused on her career and education.

Is Tate active on social media?

Our contents are created by fans, if you have any problems of Tate McRae Net Worth, Salary, Relationship Status, Married Date, Age, Height, Ethnicity, Nationality, Weight, mail us at [email protected]com

Jeff Nippard
Tags : #All the Things I Never Said#Canadian singer and dancer#Canadian Youtuber