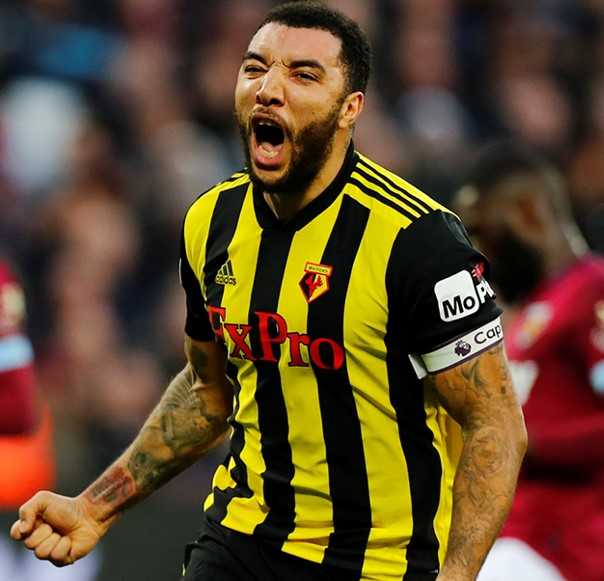 Troy Deeney is a professional English footballer who currently is playing as the captain of Watford, Premier League FC. Deeney has been playing as the striker for Watford since 2010. Born in Wet Midlands, Deeney had a troubled childhood as he along with his mother faced abuse by his own father. Deeney was also awarded as the “Watford Player of the Year” and “Watford Players’ Player of the Year” in the 2013/14 season.

What is Troy Deeney famous for?

Where was Troy Deeney Born?

Troy Deeney was born on June 29, 1988, in Birmingham, England. His birth name is Troy Matthew Deeney. Deeney belongs to British nationality and is of Black ethnicity. Cancer is his zodiac sign.

Deeney was born as one of the three children of his parents Paul Anthony Burke(father) and Emma Deeney(mother). Troy grew up in Chelmsley Wood, Solihull, where his father was a drug dealer. Troy at the age of 10, along with his mother faced assault by his father. His parents divorced when Troy was 11 and his mother raised their children alone.

Deeney wasn’t keen on studying as he was expelled from school when he was 14, without earning any GCSEs. Later in 2012, however, he earned GCSEs in English, Science, and Maths. In June 2012, Deeney was sentenced to ten months imprisonment after he kicked a man in the head during a fight. He was released after serving three months of his term.

After he left school in 2004, he began training as a bricklayer and earned £120 a week. His brother, Ellis, is also a semi-professional footballer who plays as a central midfielder.

Who is Troy Deeney Married to?

Troy Deeney was married to his former wife, Stacey Deeney. The couple together has two children, a son named Myles and a daughter named Amelia. However, their relation couldn’t last long and they split up. Currently, Deeney is single and is focusing more on his games. In 2018, Deeney gave up gambling entirely and alcohol in weeks of his games.

What is the Net Worth of Troy Deeney?

The 31 years old footballer, Troy Deeney has quiet a good earning through his professional career as a football player. His estimated net worth is around $18 million. Deeney has been earning more since he has been paying as the captain of Watford FC.

How Tall is Troy Deeney?

Troy Deeney has a well-maintained body built. He has an athletic body physique with several tattoos painted on his body. He has a dark complexion with bald hair and brown eyes. He stands tall with a height of 6ft.(1.83m).

Our contents are created by fans, if you have any problems of Troy Deeney Net Worth, Salary, Relationship Status, Married Date, Age, Height, Ethnicity, Nationality, Weight, mail us at [email protected]