Zendaya is an American actress and singer. 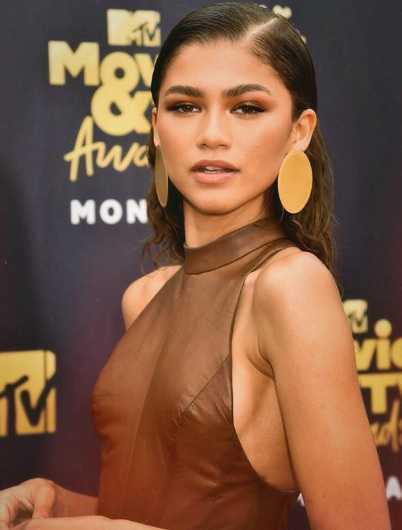 Zendaya Maree Stoermer Coleman popularly known as Zendaya is an American actress and singer. She started her career as a child model and backup dancer. She rose to prominence after she appeared as Rocky Blue on the Disney Channel sitcom, Shake It Up. She is known for her roles as K.C. Cooper on the Disney Channel sitcom, K.C. Undercover, Michelle “MJ” Jones in the Marvel Cinematic Universe superhero film, Spider-Man: Homecoming, and Anne Wheeler in the musical drama film, The Greatest Showman. She has also released a self-titled debut studio album in 2013. She has over 77 million followers on her Instagram.

Disney star, Zendaya made a surprise guest appearance on the second season premiere of the American mystery drama web television series, The OA, by Netflix. The Spider-Man: Homecoming star appeared on the series as Fola. Fola helps the private investigator, Karim Washington to understand the nature of the reality mobile game and solve the puzzle and find the missing person.

The 22-year old will reprise her role as Michelle in the Spider-Man: Far From Home, scheduled to release in July 2019.

What is Zendaya Famous For?

Where is Zendaya From?

Zendaya was born on 1 September 1996. Her birth name is Zendaya Maree, Stoermer Coleman. She was born to a father, Kazember Ajamu (Samuel David Coleman), and a mother, Claire Marie (Stoermer). She belongs to African-American ethnicity. Her birthplace is in Oakland, California in the United States. She holds an American nationality. Her zodiac sign is Virgo. She has no siblings. She is the only child. She is of African-American descent of her paternal side, whereas of German and Scottish descent on her maternal side. Her mother works as the house manager at the nearby California Shakespeare Theatre in Orinda, California. Thus, she grew up as a performer. She trained at the theater’s student conservatory program.

She attended Oakland School for the Arts where she appeared in numerous stage productions. She spent three years dancing in a dance group, Future Shock Oakland. She then attended American Conservatory Theatre, where she studied at the CalShakes Conservatory Program.

Her stage credits include Once on This Island, Caroline, or Change, Richard III, Twelfth Night, As You Like It, among others.

Who is Zendaya dating?

Zendaya is unmarried. Her sexual orientation is straight. She is reportedly single. She has managed to maintain a low profile regarding her personal life. She might or might not be dating someone. No rumors regarding her affair have surfaced yet. Previously, she was romantically linked with Trevor Jackson, Spencer Boldman, and Adam Irigoyen. She was rumored to be dating Spider-Man: Homecoming co-star, Tom Holland.

She lives in Los Angeles, California in a house worth $1.4 million.

Zendaya was reported to be secretly dating Jacob Elordi after they were spotted together on vacation in Greece in August 2019. In February 2020, a paparazzi caught Elordi giving Zendaya a kiss in New York City. Neither of them ever confirmed they were dating. Even if they had been secretly dating, their affair may have ended in 2020 because Elordi was with model Kaia Gerber. It was Zendaya’s 24th birthday, on 1 September 2020, Elordi was spotted having dinner with Gerber at Nobu in Malibu.

Zendaya who never confirmed her affair with Elordi may have been single at present. She thanked her fans on her 24th birthday via social media, “I’m incredibly grateful for all the beautiful birthday wishes I received yesterday, feeling very very special, so thank y’all ♥️ Here’s to 24”.

What are Zendaya’s Body Measurements?

What is Zendaya’s Net Worth?

Zendaya is one of the aspiring actresses in the entertainment industry. Starting her career as a fashion model, she has endorsed several brands. She worked as a fashion model for Macy’s, Mervyns, and Old Navy. She has appeared in numerous commercials for iCarly toys. She has endorsed “X-Out”, Madonna’s clothing line “Material Girl”, CoverGirl, Timmy Hilfiger, and Chi Hair Care. She also has her own several clothing lines. She became a spokesmodel for Lancome. She also earns from her singing career and business in the fashion industry. Working in the entertainment industry is her major source of income. As of 2019, her net worth is estimated at $15 million.

Our contents are created by fans, if you have any problems of Zendaya Net Worth, Salary, Relationship Status, Married Date, Age, Height, Ethnicity, Nationality, Weight, mail us at [email protected]