Andrew Mccutchen etched his name in the list of Major League Baseball greats during his time with the Pittsburgh Pirates. 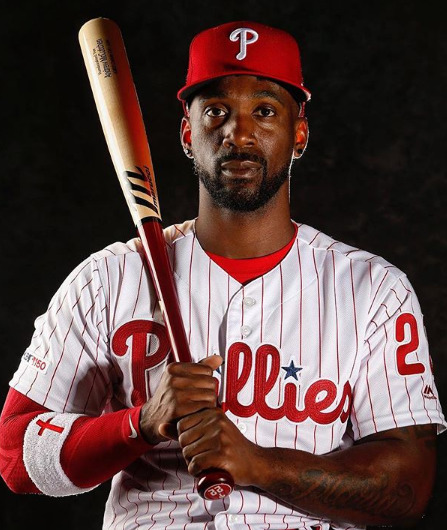 Andrew Mccutchen etched his name in the list of Major League Baseball greats during his time with the Pittsburgh Pirates. The outfielder has won a plethora of personal and team accolades, including being named to the All-Star Game for five consecutive years starting with the 2011 season. Cutch, as he is affectionately referred to made his major league debut in 2009 with the Pirates. He was traded to the San Francisco Giants ahead of the 2018 season. Well in this article, we talk more about the baseballer and his successful career.

Andrew McCutchen is out for the year with a torn ACL

Philadelphia Phillies outfielder Andrew McCutchen’s season is over. The former MVP’s 2019 campaign came to an end on Monday when he tore his ACL in a non-contact injury, while caught in a pickle. McCutchen was playing in his first year for the Phillies, after signing a three-year, $50 million deal with the club over the offseason. He was paired with the big fish of free agency, Bryce Harper, to help the Phillies make numerous runs in the coming years.

He’s also one of the easiest players in baseball to root for. He plays the game with great spirit and energy, and a constant smile on his face. He’s humble, enthusiastic, and certainly appears to be a kind, good-hearted human. His teammates love him, his quotes are always tremendous, and his philanthropic work speaks for itself.

McCutchen played 130 games with the San Francisco Giants last year, and that was more than enough to earn him the #GoodGiant and #ForeverGiant monikers. That says everything you need to know about him.

The injury was, not surprisingly, a tough pill for McCutchen to swallow.

“It’s not the news I wanted to hear,” McCutchen said after the tear was confirmed. “I just need to take the steps I need to take to get myself back and ready for next year.” In 59 games this year, McCutchen was slashing .256/.378/.457 with 10 home runs, and a league-best 43 walks drawn. He had been worth 1.7 Wins Above Replacement, per Baseball-Reference, putting him on pace to have his best season since 2015.

While the Phillies didn’t reveal a date for McCutchen’s surgery, the five-time All-Star said that he is optimistic that he’ll be back in the lineup on the opening day of the 2020 season. Baseball is worse without Andrew McCutchen. Here’s hoping he heals up well and is still a high-quality player when he returns.

Andrew McCutchen is one of the very famous and most trending personality nowadays in different social media and on the Internet as well. Moreover, he is famous as an American professional baseball outfielder for the Philadelphia Phillies of Major League Baseball (MLB). Similarly, he previously played for the Pittsburgh Pirates, San Francisco Giants, and New York Yankees.

Who are the parents of Andrew McCutchen?

Back to his early life, Andrew was born in Fort Meade, Florida, the USA as Andrew Stefan McCutchen. As of 2019, he is 33 years old with a birth sign Libra. His parents are Lorenzo Mccutchen and Petrina Swan. His father played football as a running back for Carson-Newman University.

However, his father gave up his NFL career and went back to Florida to be with his family in 1989. His mother finally married his father in 1992 only after his father became a church minister. He grew up along with his sister named Loren. Andrew holds an American nationality and belongs to the Afro-American ethnicity.

Regarding his education, McCutchen attended Fort Meade High School where he played baseball for his school team. In addition, He signed with the University of Florida but later began his professional career with the Pirates instead of going to Florida.

When did Andrew McCutchen pursue his baseball career?

Does Andrew McCutchen win the awards?

McCutchen won the National League MVP over St. Louis’ Yadier Molina as well as Arizona’s Paul Goldschmidt, the first Pirate to win the award since Bonds in 1992. Likewise, he also won his second Silver Slugger Award and his second NL Most Outstanding Player Award.

Who is Andrew McCutchen’s Wife?

Andrew McCutchen started dating his wife, Maria Hanslovan in the year 2009. Being someone who doesn’t hesitate to flaunt his love, he popped the question in The Ellen DeGeneres Show on December 11, 2013, to his wife, Maria. After a few months, he and his wife got married in 2014. Furthermore, nothing much has altered, he still leaves no chance behind to showcase his love for his wife on his Instagram.

The day of November 27, 2017, must have been the best day of Andrew’s life as he promoted himself to a father. Moreover, On the very day, together with his wife, he welcomed their first child Steel Stefan McCutchen who completed their family.

As of now, Andrew is giving his finest to be the world’s best husband and father and is making his family happy. There are no rumors regarding his personal life and career. Looking at his married life, it seems that life is beautiful with someone special on our side.

How much net worth is Andrew McCutchen owns?

As per online sources, the player used to receive an average salary of over $8 million from Pittsburgh Pirates. Presently, from Philadelphia Phillies, he earns over $13 million annual salaries as a right fielder.

On March 5, 2012, Andrew signed a $51.5 million worth contract extension with the Pirates. He is also involved in endorsements and advertisements which are the other secondary source of his net worth.

As of 2019, Andrew McCutchen has an estimated net worth of $30 million as per Celebrity Net Worth. He has maintained a fortune of bank balance from his career salary.

How tall is Andrew McCutchen?

Observing his body statistics, Andrew has a height of 5 feet 10 inches with a weight of 88 kg. Additionally, he is a physically fit baseball player who is famous for his dreadlocks. Similarly, he has dark brown eyes and his hair color is also black. His other body information is yet to be disclosed. In the case of disclosure, we will let you know.

Our contents are created by fans, if you have any problems of Andrew McCutchen Net Worth, Salary, Relationship Status, Married Date, Age, Height, Ethnicity, Nationality, Weight, mail us at [email protected]