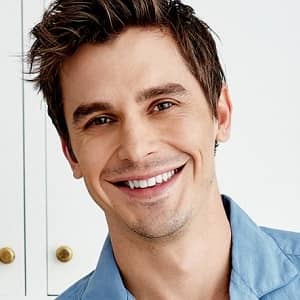 Antoni Porowski is a television personality, actor, chef, and model from Canada. He is best known for his role as the food and wine expert on the Netflix web series Queer Eye. Nobody could imagine how he started as a busboy, worked his way up as a waiter, and became a sommelier. He has appeared in movies, on TV shows, and in music videos as well.

How old is Antoni Porowski?

Born on 14th March 1984, Antoni Porowski is from Montreal, Canada. As of 2020, his age is 36. He is Canadian by nationality and belongs to Caucasian ethnicity. His zodiac sign is Pisces. Talking about his family, Antoni was born to Polish immigrants in Canada. His father is a physician but he doesn’t have a good relationship with his mother. Antoni even has two older sisters.

The 36 years old star went to Neighborhood Playhouse School of Theatre. At the age of 12, he moved to Marianopolis college to pursue his higher education. Furthermore, he has a post-graduation degree as well in creative arts from Concordia University.

As of his cooking, Antonio tells in one of his interviews that his grandmother’s recipes and techniques that he follows in his cooking as well.

How did Antoni pursue his career?

At the start of his career, Antonio Porowski auditioned for a couple of roles when he was in New York. He even mentions about not landing a work in the industry since he was a Polish. However, to date, Antoni has done several major roles in a lot of series and films.

What is the Net worth of Antoni Porowski?

Antoni is active in the cooking field for quite a long time now. We can even assume that his income is really high. Although he hasn’t revealed information regarding his official income and earnings, it is estimated to be above $300 thousand a year. Moreover, his estimated net worth is $1.6 million.

What is Antoni Porowski’s sexual orientation?

According to Antoni Porowski, his sexuality is “a little more fluid along the spectrum”. During his early days, he became quite fascinated by the Queer Eye show and used to act like them quite a time. But he really didn’t know about his sexual orientation himself.

Later he came to know that he was attracted to men rather than women. So, as of now, he is not dating any girl. However, he has dated guys like Joey Krietemeyer and Trace Lehnhoff in the past. In October 2019, he revealed on ‘Instagram’ that he had been dating Kevin Harrington.

How tall is Antoni Porowski?

It is well known that Antoni Porowski has a well-shaped physique standing at a height of 6 ft and weighs 75 kilos. His eyes are hazel and his hair color is brown. He has mentioned wearing a shoe size of 9 (US). Moreover, Antoni’s body is measured at 39-32-37 inches.

Antoni is very famous among food enthusiasts. Likely he has a huge fan following over 4 million followers on Instagram. His Instagram is under the username @antoni. Similarly, he has about 598k followers on Twitter, 300k followers on Facebook, and about 5k followers on his TikTok profile.

Our contents are created by fans, if you have any problems of Antoni Porowski Net Worth, Salary, Relationship Status, Married Date, Age, Height, Ethnicity, Nationality, Weight, mail us at [email protected]