Ashley Allyn Roberts is an American singer, dancer, actress, model, and television personality. She is a member of the American pop girl group and dance ensemble The Pussycat Dolls. 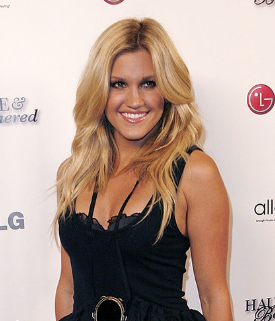 Everyone should have a life coach. We learn history, maths, and science at school, but we don't have the tools to understand emotions: to release them and not hold on to anger.

Life is short, and nobody knows what's around the corner, but I'm up for lots of new challenges.

A few years back, I had this urge to be on the go all the time. It's important to find a balance, though. Now my motto is, do the work, but recharge, too!

Ashley Roberts is an American singer, dancer, actress, model, and television personality. She was a member of the American pop girl group and dance ensemble The Pussycat Dolls, before leaving the group in February 2010 in order to pursue a solo singing and acting career. She has participated in numerous British TV shows. She is starring in the West End production of Waitress as Dawn. Let’s know more about her through this article.

Who are Ashley Roberts’s parents?

Recalling her early life, Ashley was born in Phoenix, Arizona, US. She is the daughter of Pat Roberts and Peggy Lorraine. Similarly, she has a brother Jayce Roberts. Her father was a drummer for the Mamas & the Papas, later becoming an auto dealer and her mother was a Pilates instructor. Her father committed suicide in the year 2018. It was difficult for Ashley to cope up with her father’s death, however, her mother helped her deal with it. Similarly, her nationality is American and her ethnicity is English. Regarding her education, she attended Shadow Mountain High School.

How has Ashley Roberts become popular?

Is Ashley Roberts married or not?

Reflecting on her personal life, Ashley is not married but she is dating Giovanni Pernice from 2018. Before that, she dated Kenny Wormald, Mark Wright, Ryan Fletcher, and Declan Donnelly. As of now, she is in a relationship with Giovanni Pernice and enjoying their love life without rumors of separation.

How much net worth does Ashley Roberts earn?

Ashley Roberts has accumulated tremendous net worth in her life working on numerous TV shows and albums. She is a singer, songwriter, actress, model, presenter, and television personality as well. Her music career was fabulous until the breakdown of their group- The Pussycat Dolls. As per online sites, her estimated net worth said to be $1.6 million as of 2019 while her salary is yet to be disclosed.

How tall is Ashley Roberts?

Observing her body physics, Ashley stands a height of 5 feet 3½ inches and her weight is around 51 kg. Similarly, she has blonde hair and dark brown eyes color. She used a 32B bra size, 8 (US) shoe size and 4 (US) dress size. Further, her body measures 34-24-34 inches.

Our contents are created by fans, if you have any problems of Ashley Roberts Net Worth, Salary, Relationship Status, Married Date, Age, Height, Ethnicity, Nationality, Weight, mail us at [email protected]