Bernard Sanders is an American politician who has served as the junior United States senator from Vermont since 2007 and as U.S. Representative for the state's at-large congressional district from 1991 to 2007. 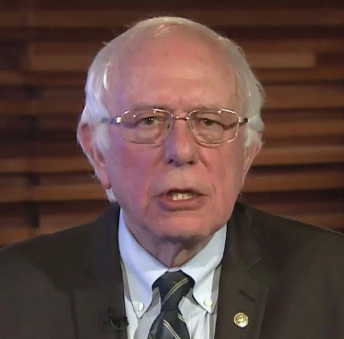 Difficult times often bring out the best in people

Election days come and go. But the struggle of the people to create a government which represents all of us and not just the one percent - a government based on the principles of economic, social, racial and environmental justice - that struggle continues

We need leadership in this country, which will improve the lives of working families, the children, the elderly, the sick and the poor. We need leadership which brings our people together and makes us stronger

Bernie Sanders is an American politician who has been the junior United States Senator from Vermont since 2007. Additionally, he is the longest-serving independent in U.S. congressional history. He gained international recognition due to his campaign against Hillary Clinton for the party’s 2016 U.S. presidential nomination.

The 2016 presidential campaign won’t be leaving our memories anytime soon. In fact, it is probably forever burned into them. But, despite coming in a proverbial “third” in the race for the presidency, Bernie Sanders has managed to stay in the headlines. Whether it be taking to Twitter to disapprove of CEOs or persistently supporting the democratic party, Sanders has managed to keep in the public eye. And with the supporter base and funding from small donors to stay in the 2020 race for some time, he doesn’t look to leave the public eye anytime soon.

Who are the Parents of Bernie Sanders?

Back to his early life, Bernie was born in Brooklyn, New York City, New York to father Elias Ben Yehuda Sanders, a paint salesman, and mother Dorothy “Dora” Sanders. Sanders became interested in the world of politics since his early life.

He had quite a rough childhood as his relatives in German-occupied Poland were killed in the Holocaust, including his father’s half-brother, Bernie’s uncle Abraham Schnützer. Sanders holds the American nationality. Furthermore, he belongs to the Ashkenazi Jewish ethnic background. Talking about his education, Sanders attended elementary school at P.S. 197 in Brooklyn. Additionally, he attended Hebrew school in the afternoons and celebrated his bar mitzvah in 1954. Furthermore, Sanders attended James Madison High School. He then studied at Brooklyn College for a year in 1959–60. Eventually, he transferred to the University of Chicago and graduated with a bachelor of arts degree in political science in 1964.

When did Bernie Sanders pursue his career as a politician?

Who are the wives of Bernie Sanders?

Reflecting his personal and love life, Bernie Sanders was married to Deborah Shilling who he divorced, in 1966. Then he became involved with Susan Campbell Mott who gave birth to his son, in 1969.

Years later in 1988, he tied the knot again with Jane O’Meara Driscoll. He considers Jane’s three children from a previous relationship as his own. He also has seven grandchildren.

How much net worth Bernie Sanders owns?

Sanders currently has a salary of about $174,000. Additionally, he has an estimated net worth of around $ 2 million. Compared to the current president, it’s a bit meager. Still, the ultra-famous proponent of democratic socialism has had a pretty long career, spanning several different occupations.

How tall is Bernie Sanders?

Talking about his body measurement, Sanders has a height of 1.83 m. Furthermore, his weight is 80 kg, his hair color is grey and eye color is white. His other body information is yet to be revealed. In the case of revealed, we will let you know.

Our contents are created by fans, if you have any problems of Bernie Sanders Net Worth, Salary, Relationship Status, Married Date, Age, Height, Ethnicity, Nationality, Weight, mail us at [email protected]