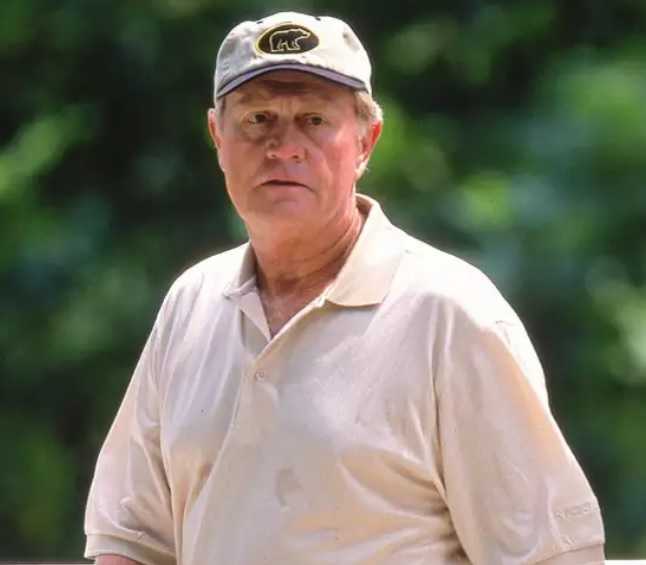 Jack William Nicklaus, professionally known as Jack Nicklaus is an American retired professional golfer. He is also nicknamed The Golden Bear. He is considered the greatest golfer of all time. He won a record 18 major championships during a span of more than 25 professional years. He has the third most PGA Tour victories with 73 wins. He is the recipient of numerous awards and honors.

What is Jack Nicklaus Famous For?

– His nickname The Golden Bear.

– Dubbed as the greatest golfer of all time.

Where was Jack Nicklaus Born?

Jack Nicklaus was born on 21 January 1940. His birth name is Jack William Nicklaus. He was born to a father, Charlie Nicklaus, and a mother, Helen Nicklaus. His birthplace is in Columbus, Ohio in the United States. He holds an American nationality. He is of German descent. He grew up in the suburb of Upper Arlington. He took up golf at the age of 10.

He attended Upper Arlington High School. He competed in football, baseball, tennis, and track, and field at high school. After high school, he attended Ohio State University. He majored in pre-pharmacy at Ohio State.

He turned professional at the age of 21 in 1961. He won numerous titles before turning pro. He became the first player in 1961 to win the individual title at the NCAA Championship and the U.S. Amateur in the same year.

He played over 25 years as a professional golfer.

In his more than 25 years as a golfer, he has won 18 major championships.

He is dubbed as the greatest golfer of all time.

He competed in 164 major championships.

He finished with 73 PGA Tour victories finishing third on the all-time list behind, Sam Snead (82), and Tiger Woods (81).

He became the youngest golfer to win the grand slam of major championships at the age of 26 after winning The Open Championship.

He became the first player to complete the double and triple career grand slams of golf’s four professional major championships.

He became the first golfer to win all four majors twice when he won the 1971 PGA Championship.

He became the Masters’ oldest winner when he won the 1986 Masters at the age of 46.

He became eligible to join the PGA Tour Champion (previously named Senior PGA Tour) in 1990. He turned 50 in January 1990.

He has won all the senior majors with the exception of the Senior Open Championship.

He made his final appearances at the Master’s Tournament and The Open Championship in 2005. He retired in 2005.

His book Golf My Way is considered one of the best instructional golf books of all time.

He has also written golf instructional columns for Golf Magazine and for Golf Digest magazine.

He has also written an autobiography, My Story.

Jack Nicklaus gained fame before turning professional in 1961. As he turned pro, he received numerous endorsement opportunities. The popularity of Nicklaus, Palmer, and Gary Player was increasing rapidly. They started the agency, International Management Group (IMG).

He left IMG in the early 1970s to set up his own management agency, Golden Bear Inc.

He has endorsement deals with several companies and has appeared in numerous TV commercials.

He is a member of the American Society of Golf Course Architects.

He also runs his own event on the PGA Tour, the Memorial Tournament.

His golf course design company, Nicklaus Design is one of the largest in the world. The company has designed numerous golf courses in the United States, Asia, Australia, Canada, Europe, and Mexico.

He was also featured in Jack Nicklaus’s computer game series by Accolade.

He has won the PGA Tour Player of the Year five times.

He was inducted into the World Golf Hall of Fame in the inaugural class of 1974.

He was inducted into the Canadian Golf Hall of Fame in 1995.

He was featured on a special commemorative issue five-pound note issued by the Royal Bank of Scotland.

There is a Jack Nicklaus Museum on the campus of The Ohio State University in his hometown of Columbus, Ohio.

He was named Global Ambassador for the International Golf Federation along with Annika Sorenstam in 2008.

He was the eighth honorary starter for the Masters.

He was awarded the Congressional Gold Medal.

Who is Jack Nicklaus Married to?

Jack Nicklaus is a married man. He is married to Barbara Bash. They tied a knot to each other in 1960. He has 5 children, Jack, Steven, Nancy, Gary, and Michael.

What are Jack Nicklaus Body Measurements?

What is Jack Nicklaus Net Worth?

Jack Nicklaus is a former professional golf player, dubbed as the greatest golfer. In his professional career span, he has won numerous titles, awards, and achievements. He won millions of prize money. He also has one of the largest golf course design company, Nicklaus Design. His net worth is estimated at $320 million.

Our contents are created by fans, if you have any problems of Jack Nicklaus Net Worth, Salary, Relationship Status, Married Date, Age, Height, Ethnicity, Nationality, Weight, mail us at [email protected]