Jofra Chioke Archer is a Barbadian-born English cricketer representing England and Sussex. In April 2019, Archer was selected to play for the England team in limited overs fixtures against Ireland and Pakistan. 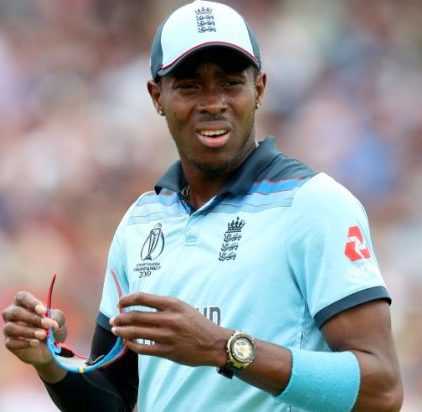 Jofra Archer is a Barbadian-English cricketer who plays cricket internationally for England and for his local club, “Sussex County Cricket Club”. Archer was selected to play for the England cricket team in April 2019.  Archer made the international debut in May 2019 and became the part of England squad who won the 2019 Cricket World Cup. Archer is more focused on the 2019 Aries series.

What is Jofra Archer Famous for?

When and Where was Jofra Archer Born?

Jofra Archer was born on April 1, 1995, in Bridgetown, Barbados. His birth name is Jofra Chioke Archer. His nationality is Barbarian-English as he has got his British citizenship. Archer belongs to mixed(English-Barbarian) ethnicity while Aries is his zodiac sign.

Jofra Archer is the son of Frank Archer(father) and Joelle Waithe(mother). His father is English while his mother is Barbadian.  Archer was raised in his hometown Barbados by his parents.

Archer attended Hilda Skeene Primary School and then Christ Church Foundation School at Barbados Later, he joined attended Dulwich College, London.  Archer played for West Indies Under-19s for three times in 2014 but his priority was always England as he wanted to play for England since his childhood.

Later when Archer was 20, he moved to England to pursue his dream to be a cricket player in 2015. But the England and Wales Cricket Board(ECB) didn’t allow him claiming that he needed to complete a seven-year residency period which later on was reduced to three years only. This gave him an early career in cricket.

When Did Jofra Archer Start His career? How Far Has He Gone?

Jofra Archer started his career in cricket through his first debut for England’s local club, “Sussex County Cricket Club” on July 8, 2016, during Pakistan’s tour of England.

Archer was bought by the Indian club, “Rajasthan Royals” in the 2018 IPL auction in January 2018. Later, Archer made his IPL debut with three wickets against Mumbai Indians on April 22, 2018. He was named the player of the match as well.

Archer continued with his skills and took a hat-trick in the 2018 T-20 Blast match against Middlesex on August 2, 2018.

Later the year, in April 2019, Archer was named in England’s squads and One Day International(ODI). Archer made his ODI debut for England against Ireland on May 3, 2019, then his Twenty 20 International debut against Pakistan on May 5, 2019.

Previously, Archer was not included in England’s squad for the 2019 Cricket World Cup but the former cricketer Andrew Flintoff wanted him to be in the squad. Later, on May 21, 2019,

Archer was one of the final fifteen-man squad as finalized for the World Cup squad. Archer played in each of the matches of England and became a part of history by winning the World Cup which was his first time.

The International Cricket Association(ICC) named Archer as the rising star of the squad and included him in their CWC 2019 Team of the Tournament. The ECB named Archer in England’s fourteen-man Test squad for the first match in the 2019 Aries squad in July 2019.

Is Jofra Archer A Millionaire?

Considering all the hard works and time that Archer has put on his career, Archer has managed to amass a great fortune of amount through his career as a cricketer. Besides, Archer has an estimated net worth of $3 million.

Archer makes most of his money through the clubs for which he plays. Archer was signed by “Rajasthani Royals” with a deal worth of 800,000 euro.  Archer also adds a few dollars to his fortune through the endorsements deals as he is the brand ambassador of Adidas.

With all his incomes in million dollars, Archer has managed to live a lavish and luxurious lifestyle on his own. Archer also owns “Tata Tiger” and “Mercedes Benz”.

Jofra Archer, the 21 years old handsome hunk, is probably single. There is no news of him been seen with girls. Archer seems to be more focused on his career as he just has started and he knows how high he deserves to fly.

How Tall is Jofra Archer?

The 21 years old cricketer, Jofra Archer has a well built masculine athletic body physique. Archer has a great height as he stands tall with a height of 6ft. 2inch.(1.88m) while his body weighs around 88kg(194 lbs).

Archer has a body measurement of 42-32-14 inches with 14 inches as his bicep size and 14(US) as his shoe size.  Talking about his looks, Archer is a tall, dark and handsome looking guy with black hair and black eyes. Archer also has tattoos on his chest.

Our contents are created by fans, if you have any problems of Jofra Archer Net Worth, Salary, Relationship Status, Married Date, Age, Height, Ethnicity, Nationality, Weight, mail us at [email protected]