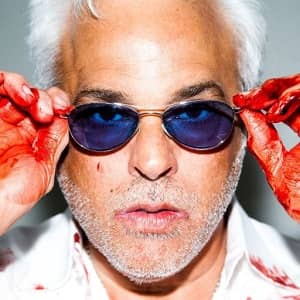 Johnny Fratto was a businessman and successful entrepreneur. He was popular for his contribution to the Howard Stern show. He had also appeared as a guest in the television show Deadliest Weapon. Johnny was the owner of Beverly Hills Choppers.

Johnny Fratto was born on 12th August 1954 in Lowa, America. Likewise, He holds the citizenship of America. His father, Louis Thomas Fratto is a well-known renowned mafia who commanded mobs in Iowa. Louis was also labeled as  ‘Lew Farrell’ and ‘Cock-eyed’ who was a labor racketeer and organized criminal activities in Des Moines, Iowa. Similarly, he was a major distributor of Capons’ Canadian Ace Beer in Iowa. There is no information regarding Johnny’s mother.

He had a brother named Frank who died in a plane crash. There is no further information regarding his childhood and siblings. Moreover, besides his successful career in the entertainment industry and the bike business, there is no information about his education and graduation.

How did Johnny Fratto pursue his career?

Johnny started his career in the entertainment industry with a show selling to Fremantle Media. He was a regular guest on the popular show Howard Stern’s show.  Similarly, he had partnered with different channels and invest money in reality shows like Recipe Hunters, Foxy Ladies, and Jelly Ballers.  Beverly Hills Bicycle Company and was the owner of the company.

Due to his passion for bikes and chopper’s, he had topped in the business market and still doing good in the global market. He had done partnership deals with big companies like Hoplite Entertainment. He is also the founder of a social club that aims to establish Howard stern’s Fan Network. Likewise, Johnny had a successful career in business.

How did Johnny Fratto die?

Johnny lived a good life but he got diagnosed with lung cancer a long time ago. The disease, he was suffering from made him weaker and weaker. Unfortunately, he passed away at the age of 61 due to sickness in the hospital in Los Angeles on 5th November 2015.
Furthermore, Howard Stern also dedicated an episode of his show to business gurus.

“Now That I’m Dead, here’s the Real Dirt” is a book where there is included Johnny’s successful business career and said to be enclosed with his experience as a Midwest mafia prince.

Johnny Fratto had a successful television career. He was successful in his love life too. He married his wife named Jowanka a long time ago. They had five children together named Angela, Alexis, Johnny Jr, Will, Joey Fratto. Johnny Fratto Jr is doing well as an actor in today’s world. There is no information about his rumors and controversies in life.

What is the Net worth of Johnny Fratto?

Johnny had been successful both on the screen as well as in business. His involvement with the production of bicycles and power bikes was one of his major forms of income. He also received a few pennies for his appearance on television shows. Unfortunately, Fratto’s net worth is yet to be reported but we believe that it would definitely run into millions of dollars.

According to various sources, there is no information regarding his body measurement.  He had a private life. But, he had a Twitter account where he had around 60k followers.

Our contents are created by fans, if you have any problems of Johnny Fratto Net Worth, Salary, Relationship Status, Married Date, Age, Height, Ethnicity, Nationality, Weight, mail us at [email protected]