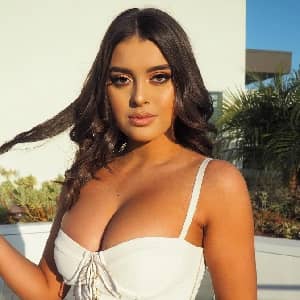 Kalani Hilliker is an American dancer, model, actress, fashion designer, and a Youtuber. She got well recognized by the media as she made an appearance in the second season of Abby’s Ultimate Dance Competition, where she quickly became Abby’s favorite due to her flexibility, technique, and having the natural look of a dancer.

When was Kalani Hilliker born?

Kalani Hilliker was born on September 23, 2000, in Phoenix, Arizona. As of 2020, her age is 19. Her zodiac sign is Virgo. Her father‘s name is Matthew Hilliker and her mother’s name is Kira Girard. She has 2 half brothers Hex Hilliker and Jet Hilliker.

She is also the stepdaughter of David Newman. During the early days, her mother enrolled her in dance classes because she thought it would be fun to dress her daughter up. Kalani started training at Club Dance in Arizona when she was five-years-old and began her ballet training at the Master Ballet Academy in Arizona at the age of 10.

How did Kalani Hilliker pursue her career?

Kalani Hilliker started dancing at the age of 2, and by her early performances, it was sure that she shall end up as a professional performer. She performed her first professional break in 2011, when she, along with several of her dance friends entered Disney Channel’s ‘Make Your Mark: Ultimate Dance Off’ contest, fighting for the prize of a featured role on the hit television show ‘Shake It Up.’ Her group ended up winning the competition and landed an episode ‘Camp it up‘.

Following in the year 2013, Hilliker competed in the second season of ‘Abby’s Ultimate Dance Competition’ and instantly became Abby Lee Miller and the audience’s favorite. Later after Hilliker got eliminated during the group challenge in the finals week, Abby Lee Miller invited KalaniHilliker and her mother, Kira Girard, to join the Abby Lee Dance Company in the ‘Dance Moms’ season 4 episode ‘Big Trouble In The Big Apple.’

Kalani has also made her appearances in ‘America’s Got Talent’ and ‘The View and also acted in television shows such as ‘Bunheads’, ‘Breaking Brooklyn’ and ‘Swiped.’ Besides acting, she has also got credited on few music videos such as Mackenzie Ziegler’s ‘It’s A Girl Party’, MattyB’s‘Turn Up The Track’, Kendall K Vertes’s‘Wear ‘Em Out’ and Mackenzie Sol’s ‘My Name.’

What are Kalani Hilliker’s body measurements?

Kalani has always been a flexible girl and is blessed with a great body. She stands at a height of 5’4″ inches, weighing about 52 kgs. According to several media sources, her body measurements are 35-27-35. She wears a bra size of 32C and cups size C. Likewise she has a pair of hazel eyes and light brown hair.

What is the Net Worth of Kalani Hilliker?

As being a dancer, she is also an Instagram model and earns a decent amount from sponsored content. Her net worth is estimated to be around $2 million whereas her salary is not revealed yet.

Is Kalani Hilliker dating anyone?

Kalani hasn’t revealed her past relationships or current relationship status to the media yet. She is most probably single. She is assumed to keep her professional life and personal life separate from each other.

Kalani has chosen to keep the necessary rumors and controversies away from the professional profile that might hamper her career.

Kalani Hilliker is mostly active on Instagram that goes by the username @kalanihilliker which has amassed over 6 M followers to date. She usually posts content where she is seen sharing her day-to-day life events and experiences. likewise, she is also available on Twitter which is under the username @KalaniHilliker carrying over 382.9k followers till today, she joined Twitter in February 2013.

Our contents are created by fans, if you have any problems of Kalani Hilliker Net Worth, Salary, Relationship Status, Married Date, Age, Height, Ethnicity, Nationality, Weight, mail us at [email protected]