Mei Yamaguchi, also known by her ring name V Hajime or V.V is a Japanese female mixed martial artist and kickboxer. She currently fights as a lightweight in the Jewels production. 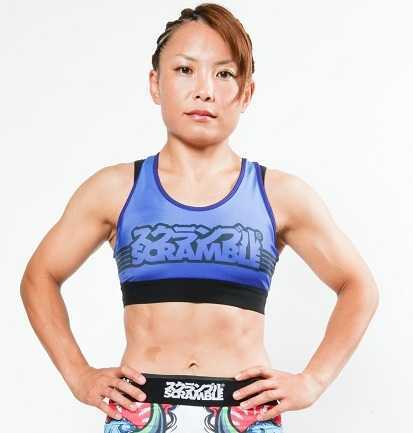 Mei Yamaguchi, also known by her ring name V Hajime or V.V is a Japanese female mixed martial artist and kickboxer. She currently fights as a lightweight in the Jewels production. She was the final Valkyrie Featherweight Champion. She announced in February 2011 that she would begin competing as a freelance fighter.   Her former nickname V Hajime comes from the V1 armlock wrestling move. She has recorded 20 professionals wins to date.

What is Mei Yamaguchi Famous For?

Where was Mei Yamaguchi born?

Mei Yamaguchi was born on 3 February 1983. Her birthplace is in Tokyo in Japan. She holds Japanese nationality.

She studied some of her elementary school years in Los Angeles, California. She returned to Japan where she continued her studies. She later returned to the United States to pursue her university education.

She started learning karate around the age of 7. She wanted to become like Jackie Chan. She started training in Brazilian Jiu-Jitsu during her college years. After she returned to Japan, she joined Butoku Kai.

She entered the Max Jiu-Jitsu Academy in 2005.

She started her professional MMA career in the lightweight division in March 2007, where she defeated Anna Saito in Smackgirl-F 2007: The Next Cinderella Tournament 2007 First Stage.

She defeated Saori Ishioka in May 2007 and later Emi Tomimatsu in the Next Cinderella Tournament 2007 lightweight division final in September 2007.

She was defeated by MMA legend Yuka Tsuji for the Valkyrie promotion event, Valkyrie 01 in November 2008.

She then defeated Emi Fujino and Kyoko Takabayashi in the inaugural Valkyrie women’s featherweight tournament in 2009.

She won the tournament to earn the right to face Yuka Tsuji for Valkyrie’s Featherweight championship. she defeated Tsuhi with a rear-naked choke in only 76 seconds at Valkyrie 04. Tsuji faced her only second defeat in her career and it was the first time a fellow Japanese fighter defeated her.

She was defeated by Kyoko Takabayashi in November 2010 and Seo Hee Ham in July 2011.

She fought outside Japan for the first time in her MMA career in March 2012 in Finland, where she was defeated by Katja Kankaanpaa.

She faced defeat in her second fight outside Japan in October 2013, where she was defeated by Patricia Vidonic at Pacific Xtreme Combat 40.

She faced defeats in submission grappling to Yasuko Mogi in April 2007 and Miku Matsumoto in July 2008.

She had a successful run in shoot boxing.

She later defeated Madoka Okada and lost to Rena Kubota in the tournament final.

She competed in the shoot boxing Girls S-Cup in 2010 and 2011 and reached its final in the 2012 edition. She was defeated by Rena Kubota in the final.

Who is Mei Yamaguchi married to?

No personal information about her is available at present. She has maintained a low profile. It will be updated soon.

What are Mei Yamaguchi Body Measurements?

What is Mei Yamaguchi Net Worth?

Mei Yamaguchi earns from her fighting career. She receives from fight wins, bonuses, contracts, and endorsements. Her net worth is not available at present.

Our contents are created by fans, if you have any problems of Mei Yamaguchi Net Worth, Salary, Relationship Status, Married Date, Age, Height, Ethnicity, Nationality, Weight, mail us at [email protected]