Nicholas Edward Foles, professionally known as Nick Foles is an American football quarterback for the Jacksonville Jaguars of the National Football League (NFL). 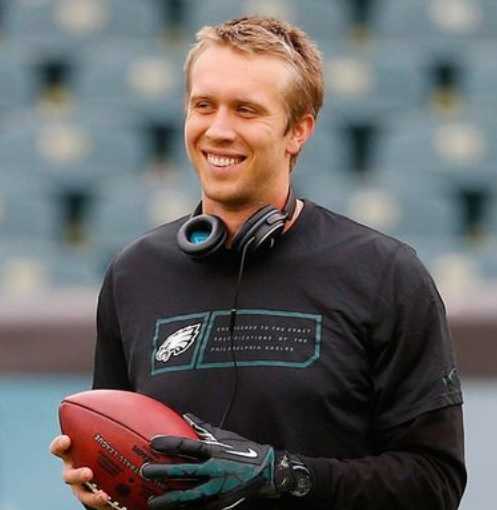 Nicholas Edward Foles, professionally known as Nick Foles is an American football quarterback for the Jacksonville Jaguars of the National Football League (NFL). The Philadelphia Eagles drafted him in the third round of the 2012 NFL Draft. He led the Eagles to win their first Super Bowl LII in 2017. He has also played for the St. Louis Rams and Kansas City Chiefs. He played college football at Arizona. He is currently an online graduate student at Liberty University, where he is earning his master’s degree in divinity. He has stated that he plans to become a pastor after his football career.

What is Nick Foles Famous For?

Where was Nick Foles Born?

Nick Foles was born on 20 January 1989. His birth name is Nicholas Edward Foles. He was born to a father, Larry Foles, and a mother, Melissa Foles. Both his parents are restaurateurs. His birthplace is in Austin, Texas in the United States. He holds an American nationality. His religion is Christian.

He attended Westlake High School, where he graduated in 2007. At high school, he broke the school record held by Drew Brees with 5,658 yards and 56 touchdowns. He was also an excellent basketball player having received two team MVP honors.

He originally committed to Arizona State but later decided to attend Michigan State. He ultimately transferred to the University of Arizona. He threw 10,011 yards and 4 touchdowns during his time at Arizona. He graduated from the University with a degree in communication.

The Philadelphia Eagles selected him with the 88th overall pick in the third round of the 2012 NFL Draft. He signed a four-year contract with the Eagles in May 2012.

He was named to the 2014 Pro Bowl as an alternated and was drafted by Team Sanders, where he was named Pro Bowl Offensive MVP award.

The Eagles traded him to the St. Louis Rams in March 2015 in exchange for Sam Bradford and a 2015 fifth-round pick.

He signed a two-year contract extension worth $24.5 million with the club in August 2015.

He made his Rams debut against Seattle Seahawks.

He was released from the Rams upon his request in July 2016.

He signed a one-year deal worth between $6.75 million and $16 million depending upon his performance with the Kansas City Chiefs in August 2016.

He became a free agent in March 2017 when the Chiefs declined a second-year option on his contract.

Return to the Philadelphia Eagles

He signed a two-year contract to return to the Philadephia Eagles in March 2017.

Foles completed 28 of 43 passes for 373 yards, 3 passing touchdowns, and 1 interception. He was named the Super Bowl LII Most Valuable Player.

He became a free agent in February 2019.

He released his autobiography, Believe It: My Journey of Success, Failure, and Overcoming the Odds. The book debuted at No. 5 on the New York Times best-seller list.

Who is Nick Foles Married to?

Nick Foles is a married man. He is married to Tori Moore, the youngest sister of former NFL tight end Evan Moore. Foles and Moore were briefly teammates with the Eagles in 2012. They got married in 2014. They have a daughter, Lily James Foles, born in 2017.

What are Nick Foles Body Measurements?

What is Nick Foles Net Worth?

Nick Foles is one of the popular football players in the NFL who won Super Bowl LII and Super Bowl LII MVP with the Philadelphia Eagles. He earns from his professional football career. His income comes from his salary, bonuses, contracts, and endorsements. He recently signed with the Jacksonville Jaguars for $88 million in March 2019. His net worth is estimated at $13 million.

Our contents are created by fans, if you have any problems of Nick Foles Net Worth, Salary, Relationship Status, Married Date, Age, Height, Ethnicity, Nationality, Weight, mail us at [email protected]