Ryan García is an American professional boxer who has held the WBC interim lightweight title since January 2021. As of January 2021, he is ranked as the world's third best active lightweight by The Ring magazine and the Transnational Boxing Rankings Board, fourth by ESPN, and fifth by BoxRec. 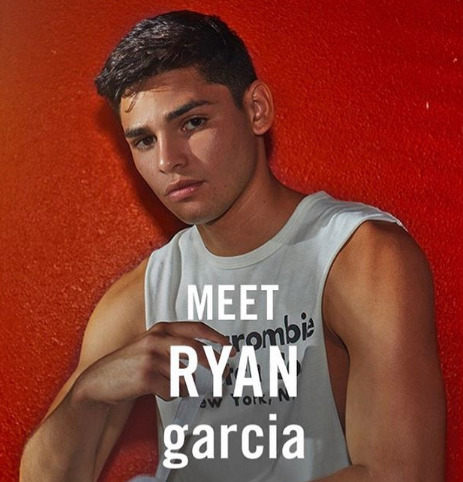 Ryan Garcia is an American professional boxer who is currently competing in the lightweight division from the Golden Boy Promotions. Garcia is one of the finest boxers in the world and is the WBO–NABO and WBC Silver lightweight Titleholder. Also, he hasn’t lost a single match since his first debut in 2016.

What is Ryan Garcia Famous for?

Where is Ryan Garcia From?

Ryan Garcia was born on August 8, 1998, in Victorville, California, United States. His birth name is Ryan Garcia. His nationality is American and is of Mexican descent. Garcia belongs to White ethnicity while Leo is his zodiac sign.

Garcia is the son of Henry Garcia(father) and Lisa Garcia(mother). His father, Henry dreamed of becoming a perfect professional boxer but he turned to be a trainer instead. Both of his parents were actively involved in his career since his childhood as currently, his mother works as his Personal Administrative Assistant for commercial projects and his father, one of his trainers.

Ryan was raised along with his four siblings: three sisters, Demi, Sasha, and Kayla and a younger brother, Sean Garcia. Sean is also a professional boxer who fights in the Super Bantamweight division. Ryan and Sean began training when Ryan was just 7 with their father. Both of the brothers got great support from their parents to pursue their career in boxing.

Besides, as an amateur, Ryan already had a 215-15 boxing record. He came first in the National Pals, Silver Gloves, Junior Olympics, and Junior Golden Glove. He even had finished as second at the 2014 Junior Worlds event.

Who is Ryan Garcia Dating?

The 21 years old boxer, Ryan Garcia is currently single. However, he is the father of his newly born daughter, Rylie Garcia. Rylie was born in March 2019. Rylie is the daughter of Ryan and his former girlfriend, Catherine Gamez. The couple dated for a while and then they broke up. It is also rumored that he is dating Andrea Celina.

Recently, in January 2019, Ryan announced his crush for the popular singer, Selena Gomez. Besides, Ryan is a very popular name in the media world as he has around 3.8 million followers on his Instagram account. He also seems to be a friend of Shawn Mendes.

What is the Net Worth of Ryan Garcia?

Within an early age of 21, Ryan Garcia has managed to earn great wealth and amount through his professional career as a boxer. Ryan has been able to amass a fortune worth $200k as his net worth with his salary as $50k. Ryan makes his money more from his several matches and endorsement deals. He is currently endorsed by large companies like Gymshark.

How Tall is Ryan Garcia?

Ryan Garcia has a well maintained athletic body physique. Being a boxer, he has been able to have a fit body with good health. He stands tall with a height of 5ft. 10inch.(1.70m) while his body weighs around 58kg. He has a fair complexion with light brown hair and eyes.

Our contents are created by fans, if you have any problems of Ryan Garcia Net Worth, Salary, Relationship Status, Married Date, Age, Height, Ethnicity, Nationality, Weight, mail us at [email protected]