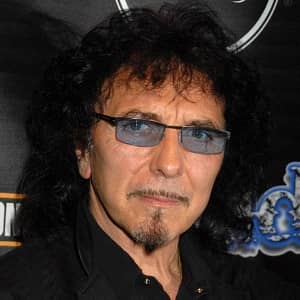 Tony Iommi; real name Anthony Frank Iommi; is an English guitarist as well as a songwriter. He has gained a lot of fame over the years as he was the lead guitarist and was one of the founding members of the heavy metal band, Black Sabbath. He has left his mark in the music industry and many fans of heavy metal consider Iommi’s name to be synonymous with heavy rock.

Who is Tony Iommi?

Tony Iommi was born on the 19th of February, 1948 in Handsworth, Birmingham, England. As of July 2020, his age is 72 years old. He was born to father Anthony Frank Iommi and mother Sylvia Maria Iommi. He was born as their only child and he was raised in his hometown of Handsworth.

Iommi had an interest in music and he chose the guitar as his instrument when he was a teenager. Iommi’s nationality is British.

As a child, Iommi attended the Birchfield Road School. He didn’t pursue further education than this and started working after graduating from High School.

How did Tony Iommi pursue his career?

Iommi played by detuning his guitar; mainly to ease tension on his fingers that had been injured in a previous accident; and as the bandmates did the same to match Iommi, the technique became a major part of heavy metal music. They changed their styles a little throughout the years to keep up with the newer generations and in the process found massive success.

Iommi also performed alongside Queen in the Freddy Mercury Tribute Concert, playing four songs alongside the remaining members of Queen and other guest bands. He toured extensively along with the band. The band’s lineup also changed quite a bit throughout the years but Iommi did not leave. He was consistently a part of the band through its long run, even until now. He has also worked on his solo career, releasing 3 albums that were successful.

Iommi has quite a legacy and this is evident by the fact that he is widely considered to be one of the greatest rock guitarists of all time. His riffs are loved by all rock fans and he has been a major influence on many guitarists after him. He is also recognized by many as the creator of heavy metal music. He has also won a number of awards throughout his career including Q Awards, Kerrang! Awards, and also the Grammys as a part of Black Sabbath. He is also ranked high in lists of the greatest guitarists of all time.

What is the Net Worth of Tony Iommi?

As of 2020, Tony Iommi has a huge net worth of approximately 140 million U.S. dollars. He has accumulated all this through his incredibly successful career as a musician. His annual in his prime or current years is unknown as of yet. It is also very hard to estimate when we consider all the factors that affect the income of a huge musician like Iommi.

How tall is Tony Iommi?

Tony stands at a height of 6 feet and weighs around 65 kilograms. His hair color is black and he has greenish eyes.

Who is Tony Iommi married to? Wife, Children

Tony Iommi is currently married. He married Maria Sjöholm on the 19th of August, 2005 in a very secret ceremony with only one witness. Their marriage has been going strong even after almost 15 years have passed.

Tony was married 3 times before his final marriage with Maria. His first marriage was in late 1973 when he married Susan Snowdon and it lasted for about eight years. His second marriage was with an American model by the name of Melinda, whom he married in 1980. They had a daughter, Toni-Marie Iommi in 1983. The couple divorced in the mid-1980s.

After Melinda, Iommi met an Englishwoman by the name of Valery in 1986-87 and they got married after a six-year-long relationship. The couple could not last long, however, and got divorced in the late 1990s. He was also briefly engaged to rock musician Lita Ford in the mid-1980s.

Our contents are created by fans, if you have any problems of Tony Iommi Net Worth, Salary, Relationship Status, Married Date, Age, Height, Ethnicity, Nationality, Weight, mail us at [email protected]