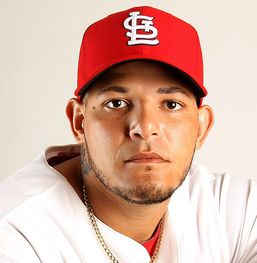 You play more games, you get more maturity, and you get smarter

Yadier Benjamin Molina famed as Yadier Molina is a famous Puerto Rican professional baseball catcher who plays for the St. Louis Cardinals of Major League Baseball (MLB). He has played his entire 16-year major league career with the Cardinals since his debut on June 3, 2004, and also for the Puerto Rican national team in four World Baseball Classic (WBC) tournaments. Moreover, he is also the recipient of a number of accolades, including nine Rawlings Gold Gloves and six Fielding Bible Awards.

St. Louis Cardinals catcher Yadier Molina had some strong words for Jake Marisnick after the Houston Astros outfielder ran over Los Angeles Angels catcher Jonathan Lucroy during a play at the plate in Sunday’s game. He took to Instagram on Sunday night to call for action: “Verified Bulls**t!! MLB needs to take action on this Bulls**t play! F**k! Praying for Lucroy! slide slide slide f**kkk !!!”. After Houston Astros’ Jake Marisnick collided with Los Angeles Angels catcher Jonathan Lucroy while trying to score during the eighth inning of Sunday’s game, St. Louis Cardinals veteran catcher Yadier Molina spoke out against Marisnick’s play in an Instagram post. Molina was furious about the scary collision, saying it was a “bull**** play” while calling on MLB to take action. The umpires called Marisnick out under the home plate collision rule. The Astros challenged the ruling, but it was upheld. After the collision, Lucroy left the game to undergo a CT scan and an evaluation for a possible concussion and nose fracture.

Yadier was born on 13th July 1982 as Yadier Benjamin Molina in Bayamon, Puerto Rico. He was born to Gladys Matta and Benjamin Molina, Sr., the youngest of three boys. His father played second base as an amateur and worked as a tools technician ten hours per day in a Westinghouse factory. He attended Maestro Ladislao Martinez High School in Vega Alta. His two older brothers, Bengie and Jose, also materialized into distinguished defensive catchers with lengthy careers in Major League Baseball (MLB). His nationality is Puerto Rican and his ethnicity is White. As of 2018, his age is 36.

Yadier Molina is a very handsome and charming character baseball player. He has got an attractive personality and he has been able to collect a lot of followers from his looks. He has an average height of 1.80 m and a balanced bodyweight of 93 Kg. Sadly, his other body measurements information has not been revealed yet but we will add it quickly as soon as, once we get information. Overall, his body build is athletic.

The career of Yadier Molina

Net Worth of Yadier Molina

Yadier Molina is a very successful baseball player and he has worked very hard through the years in the MLB. He has come to make himself a great net worth. In the year 2017, he signed a contract extension with the St. Louis Cardinals that would have him with the team for the next three years. The contract which was worth $60 million, had it that he would receive a salary of $14 million in the first year, $20 million in 2018, and the same amount ($20 million) in the third year. Moreover, he has net himself a fortune that is worth $51 million. He has made his fortune in the MLB as well as some endorsement deals he has had over the years including with New Balance and T-Mobile. Overall, he is satisfied with his earnings without any doubt.

Yadier is a married person and the name of his wife is Wanda Torres. The two have been married since 2007. The interesting thing about the couple is that they met since the time they were both in high school. Their union has been blessed with two kids, Yanuell who was born in 2008, and Arianna, born in 2010. As of today, the couple is living a happy life without any disturbances.

Our contents are created by fans, if you have any problems of Yadier Molina Net Worth, Salary, Relationship Status, Married Date, Age, Height, Ethnicity, Nationality, Weight, mail us at [email protected]