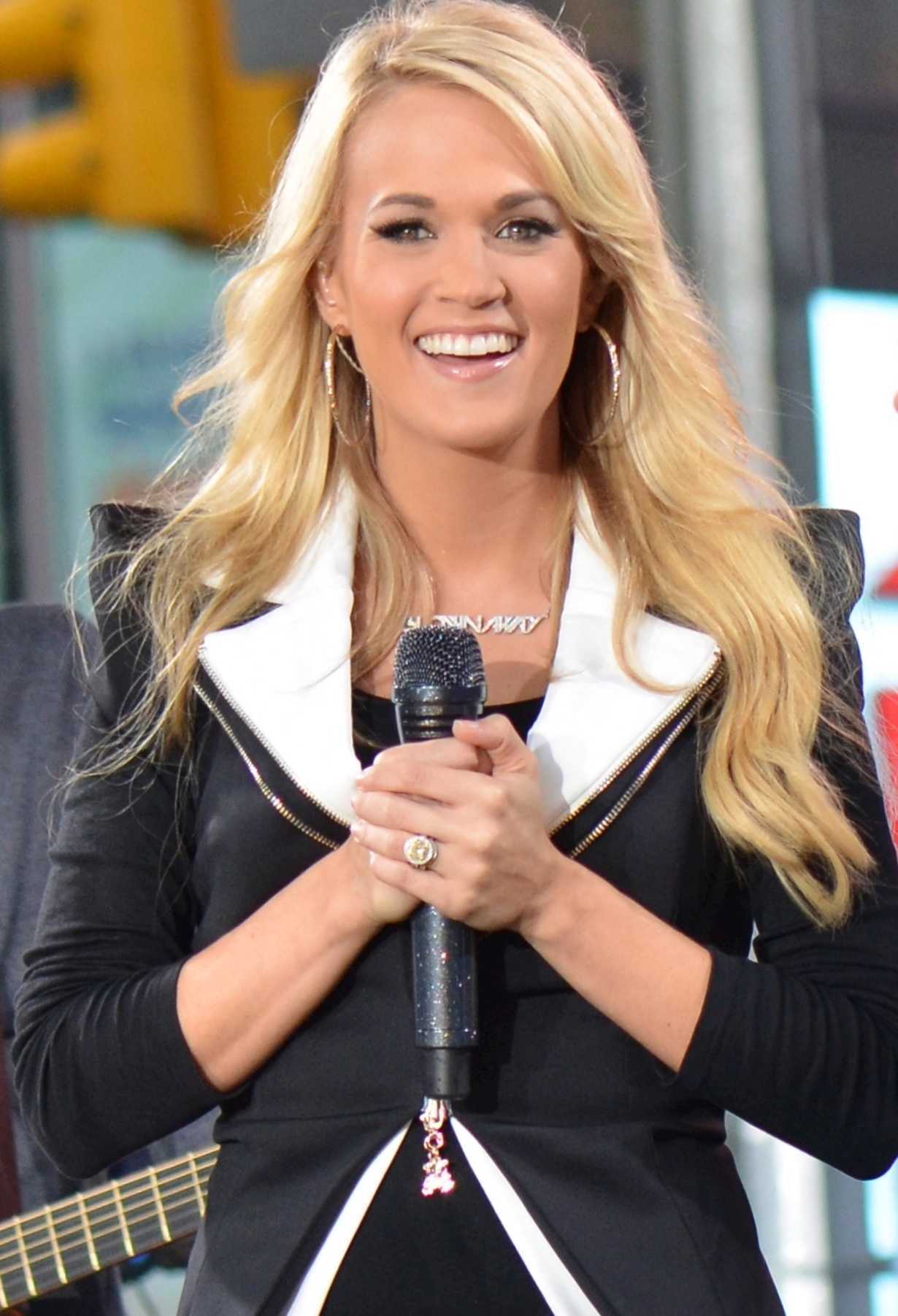 Rising to prominence after being declared the winner of American Idol Season 4, Carrie Underwood is now one of America’s most successful singers and songwriters. The popular country (pop, rock) singer Carrie has established her as America’s top female country singers of all time releasing several hit tracks throughout her career. The six-time Grammy Award winner Carrie is not only known for her musical career but also for the achievements she has made as an actress. Following the great success that Carrie achieved as the winner of the reality television show ‘American Idol’ in 2005, she has appeared in several television shows and has even debuted as a film actress. Her debut single, “Inside Your Heaven”, made her the only country artist to debut at number one on the Billboard Hot 100 chart and the only solo country artist in the 2000s to have a number-one song on the Hot 100. Her debut album, Some Hearts (2005), was bolstered by the successful crossover singles “Jesus, Take the Wheel” and “Before He Cheats”, becoming the best-selling solo female debut album in country music history, the fastest-selling debut country album in Nielsen SoundScan history and the best-selling country album of the last 17 years.

Carrie Underwood and Thomas Rhett both won for entertainer of the year on Wednesday (16th Sept. 2020); the first tie for the trophy in ACM Awards history. Carrie Underwood had a lot of unforgettable moments, but she does have one regret. Speaking to reporters backstage after the show, she expressed remorse over not mentioning husband Mike Fisher and their two sons (Jacob Bryan, 19 months, and Isaiah Michael, 5½) during her heartfelt acceptance speech for entertainer of the year. “I’m a dummy for not mentioning my husband or my children in my acceptance speech. You would think after this many years and seeing other people give speeches and doing some of my own, I would think of people who are important to me. So I’m sorry! I do love my children and my husband!” said Underwood.

What is the Birthplace of Carrie Underwood?

Known across the world by her stage name ‘Carrie Underwood’, the blonde was actually born as Carrie Marie Underwood on 10th March 1983 in Muskogee, Oklahoma. She was born as the youngest of three daughters born to Stephen Underwood and Carole. Her father works in a sawmill while her mother is an elementary school teacher. Shanna and Stephanie are her two elder sisters. She along with her sisters was brought up in their parents’ farm in Checotah, Oklahoma. In the year 2001, she was graduated from Checotah High School as salutatorian. After that, she graduated magna cum laude (with great honor) from Northeastern State University in Tahlequah, Oklahoma majoring in mass communication. As of 2020, she celebrated her 37th birthday. Her nationality is American and her ethnicity is American-White. Her race is White. Pisces is her Zodiac sign and her religion is Baptist.

How was the Career of Carrie Underwood?

Awards and Achievements of Carrie Underwood

Carrie is a legendary female country singer with a huge collection of awards. The six-time Grammy Award winner, Carrie was even nominated for a Golden Globe Award for producing the best original songs. She holds a Guinness World Record for producing most #1 country songs in the United States. She is truly a super-talented singer who has become a role model for millions of people’s life. Her accolades include seven Grammy Awards, 11 Billboard Music Awards, 15 American Music Awards, a Guinness world record, and inductions into the Hollywood Walk of Fame and the Grand Ole Opry. Billboard named her the top female country artist of the 2000s and 2010s and Some Hearts the top country album of the 2000s. Recently, Carrie Underwood and Thomas Rhett both won for entertainer of the year on Wednesday (16th Sept. 2020); the first tie for the trophy in ACM Awards history.

Who is Carrie Underwood married to?

Growing up, Carrie dated her first boyfriend when she was 19 years old. Drake Clark was her first love whom she met during her college years. They were in a serious relationship from 2002 but spilt in 2005. During an interview with Cosmopolitan, Carrie stated that she never had a serious relationship after breaking up with Drake, and hence her romantic bondage with quarterback player Tony Romo and actor Chace Crawford ended within a short period of time. However, Carrie’s relationship with Mike Fisher has lasted until this day. Mike is a professional ice-hockey player from Canada who is currently playing for the Nashville Predators. Carrie and Mike first met at a concert in 2008. They began dating and got engaged after a year in December 2009. On 10th July 2010, they got wedded in Greensboro, Georgia. In September of 2014, the couple made a public announcement regarding Carrie’s pregnancy. The couple welcomed their first child, son Isaiah Michael Fisher on February 27, 2015. Their second son, Jacob Bryan Fisher was born in January 2019. At present, the couple is enjoying their life a lot.

Carrie is an open-hearted woman who is always finding ways to help people in need. She even established a foundation called Checotah Animal, Town, and School Foundation in 2009 with the motives of helping people from her hometown. She is an animal rights activist and became an official spokeswoman of Pedigree. She along with her husband has raised a voice in support of LGBT. Both of them have publicly supported same-sex marriage as well. Carrie is supported by several other charities.

How much is Carrie Underwood’s Net Worth?

Carrie Underwood is a very talented singer, songwriter, record producer, and actress. Her successful singing career along with occasional acting has earned her huge net worth which is estimated to be around $65 million as of 2020. She has also endorsed many brands such as Olay, Nintendo, Target, Sketchers, etc which also boost up her income. The exact details about her salary have not been disclosed but there is no doubt in the mind of her followers that she is earning a healthy income. Her primary source of income comes from a singing career.

How tall is Carrie Underwood?

Carrie has a tall weight of 160 cm and has a weight of 53 Kg. She has a body measurement of 34-23-33 in or 86-58.5-84 cm. Her dress size is 4 US and her shoe size is 7 US. Her hair color is blonde and her eye color is dark brown. Overall, she has got a healthy body as of now. She maintains her body a lot following a balanced diet. Previously, she suffered aa scary accident in November that left her with more than 40 stitches in her face. The country star fell outside her Nashville home, resulting in a broken her wrist. However, it wasn’t until New Year’s Eve that Underwood, 35, revealed the fall also caused severe cuts to her face. Seven weeks after the accident, Underwood said that she’s on the mend but “not quite looking the same.”

Our contents are created by fans, if you have any problems of Carrie Underwood Net Worth, Salary, Relationship Status, Married Date, Age, Height, Ethnicity, Nationality, Weight, mail us at [email protected]