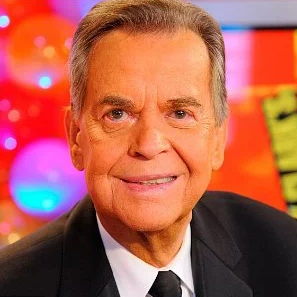 Dick Clark was a cultural icon and an American radio and television personality, television director, and film actor best known for hosting American Bandstand from 1957 to 1988. When he was named the substitute host of Bob Horn’s Bandstand on WFIL in Philadelphia in the early 1950s, he shot to fame. He became the show’s host in 1956. The show was then picked up by ABC in 1957, and the name was changed to American Bandstand. He also presented the game show Pyramid and Dick Clark’s New Year’s Rockin ‘Eve, which broadcast the New Year’s Eve celebrations in Times Square. This article will tell you more about him and his work.

What is Dick Clark famous for?

Dick Clark is from where?

Dick Clark was born in Mount Vernon, New York, to parents Richard Augustus Clark and Julia Fuller Clark in 1929, according to his biography. Bradley Clark, his younger brother, was killed in the Battle of the Bulge during WWII. He, too, was of American nationality and English ethnicity. He was also born under the sign of Sagittarius.

Where does Dick Clark go to school?

Dick Clark graduated from A.B. Davis High School in 1947 and attended Syracuse University in Syracuse, New York. Until joining WFIL radio in Philadelphia in 1952, he worked at radio and television stations in Syracuse and Utica.

What is the profession of Dick Clark?

What was the cause of his death?

Dick Clark announced that he had type 2 diabetes during an interview on Larry King Life in April 2004. At the time of his death, he had coronary heart disease, according to his death certificate.

He was admitted to the hospital in Los Angeles in December 2004 after suffering a minor stroke. Despite the fact that he was supposed to recover, Clark was unable to host his annual New Year’s Rockin ‘Eve show. The following year, he returned to the series, but his dysarthria from the stroke left him unable to speak clearly for the rest of his life.

Dick Clark died of a fatal heart attack on April 18th, 2012, while undergoing a transurethral resection operation to treat an enlarged prostate at the age of 82. His family has yet to determine whether or not a public memorial service will be held, but has indicated that “there will be no funeral.” On April 20th, he was cremated and his ashes dispersed in the Pacific Ocean.

Who is Dick Clark’s wife?

Dick Clark was married three times before his death, according to his personal life. In 1952, he married Barbara Mallery. The couple had one son, Richard A. Clark, but the marriage did not work out, and they divorced in 1961.

Then, in 1962, he married Loretta Martin. The couple had two daughters, Duane and Cindy, but the marriage did not work out, and they divorced in 1971. Finally, he married Kari Wigton in 1977, and they were married until his death.

What is Dick Clark’s net worth?

Dick Clark receives a decent amount of money and fame from his many careers in the entertainment industry, including becoming a radio and television host. According to some online sources, his estimated net worth at the time of his death was $300 million.

His salary, however, has yet to be revealed. His other jobs, such as TV producer and actor, also contribute to his wealth.

How tall is Dick Clark?

Dick Clark was 5 feet 9 inches tall and weighed an undisclosed amount before his death. His eyes and hair are both dark brown, as well. Furthermore, no other details about his body have been revealed. We will notify you if any information is made public.

Our contents are created by fans, if you have any problems of Dick Clark Net Worth, Salary, Relationship Status, Married Date, Age, Height, Ethnicity, Nationality, Weight, mail us at [email protected]