Jillian Leigh Bell is an American comedian, actress, and screenwriter. She stars in the 2019 film Brittany Runs a Marathon. 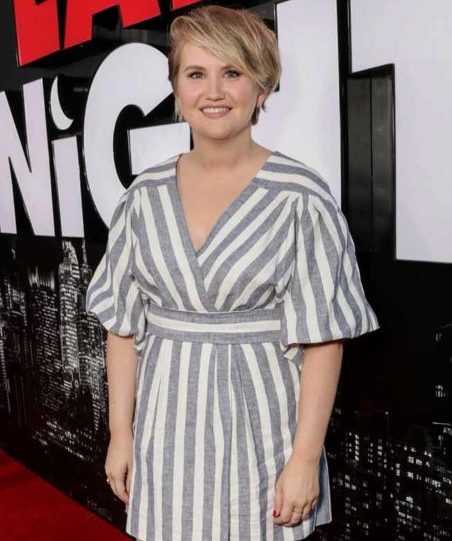 Jillian Leigh Bell, popularly known as Jillian Bell is an American comedian, actress, voice actress, and screenwriter. She is known for her roles as Jillian Belk on Workaholics and as Dixie on the final season of Eastbound & Down. She was also the writer for SNL in 2009. She has over 149k followers on her

What is Jillian Bell Famous For?

Where was Jillian Bell Born?

Jillian Bell was born on 25 April 1984. Her birth name is Jillian Leigh Bell. Her birth place is in Las Vegas, Nevada in the United States. She holds American nationality. She was born to a father, Ron Bell, and a mother, Tanzy Bell. She is of part Romanian descent. Her zodiac sign is Taurus.

She started studying improv at the age of 8. She attended Bishop Gorman High School, where she graduated in 2002. After high school, she moved to Los Angeles, California. She then became a member of the Groundings.

Bell is an alum of The Straitjacket Society in Los Angeles.

She made her television debut in the 2006 shorts, Crossbows & Mustaches.

She later appeared in Preppy Hippies and Waiting to Die before joining Saturday Night Live.

She auditioned for the cast of Saturday Night Live.

She landed the role of Jillian Belk in the American sitcom, Workaholics in 2011.

She had a major role as Dixie in the 2013 sports comedy television series, Eastbound & Down.

She appeared as Renata in CBS comedy series, Partners in 2012.

She has guest appeared in other series and sitcoms such as Worst Week, Curb Your Enthusiasm, Franklin & Bash, Friends with Benefits, To My Future Assistant, Portlandia, Dogs in a park, Drunk History, Ryan Hansen Solves Crimes on Television, and Neurotica among others.

She is also the creator and writer of the sitcom, Idiotsitter, where she appeared as Genevieve “Gene” Russell.

She made her film debut in a minor role in the 2011 comedy film, Bridesmaids.

She later appeared in the films, The Master, 22 Jump Stree, Inherent Vice, Goosebumps, The Night Before, Off Christmas Party, Fist Fight, Rough Night, Game Over Man!, Sword of Trust, and Bill & Ted Face the Music.

She is the executive producer of the 2019 comedy-drama film, Brittany Runs a Marathon. She also stars in the film as Brittany Fogler.

She has voice roles in the 2016 computer-animated comedy film, The Angry Birds Movie.

Who is Jillian Bell Married to?

How Tall is Jillian Bell?

Jillian Bell stands at a height of 1.68 m i.e. 5 feet and 6 inches tall. She has a body weight of 61 kg. She has an average body build. Her body measurements are 34-26-35 inches. She has hazel eyes and her hair color is blonde.

What is Jillian Bell Net Worth?

Jillian Bell earns from her acting career. She has appeared in numerous films and television series. She has also voiced several films and series. Her major income comes working in the entertainment industry. Her net worth is estimated at $2 million.

Our contents are created by fans, if you have any problems of Jillian Bell Net Worth, Salary, Relationship Status, Married Date, Age, Height, Ethnicity, Nationality, Weight, mail us at [email protected]