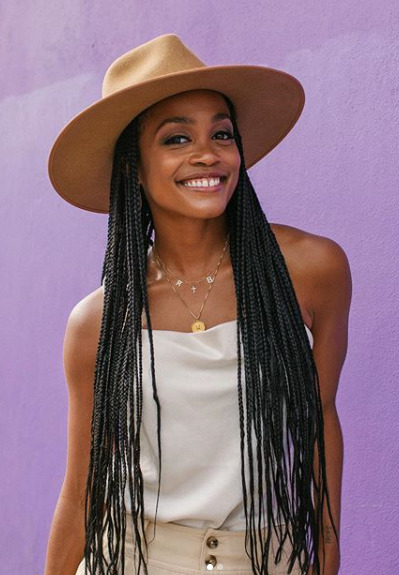 An American lawyer, Rachel Lindsay is known for her appearances in the TV shows like The Bachelor and The Bachelorette. She was the first African-American Bachelorette in the franchise. Also, She has worked at the law firm Cooper & Scully, P.C. Let’s know more about her through this article.

What is Rachel Lindsay famous for?

How old is Lindsay Rachel?

Recalling her early life, Lindsay was born in Dallas, Texas, the U.S. to her parents, Sam A. Lindsay and Kathy Lindsay in the year 1985 which makes her 35 years old at present. His father is a federal judge and her mother is a former computer programmer. Also, she has two sisters named Constance and Heather. Similarly, she holds American citizenship and belongs to Afro-American ethnicity. Her birth sign is Taurus and her religious views are Christianity.

Talking about her academic qualifications, she earned her Bachelor’s degree from The University of Texas at Austin where she studied kinesiology and sports management and was a member of Delta Sigma Theta Sorority, Inc. Also, She received her J.D. degree from Marquette University in Milwaukee, Wisconsin. She became licensed to practice in the state of Texas on November 4th, 2011.

What is Rachel Lindsay doing now?

Who Is Rachel Lindsay husband?

Reflecting on her personal life, Rachel was married to his long-term boyfriend, Bryan Abasolo. The couple met on the TV show, The Bachelorette in 2017 and began dating each other. After a few years, they engaged and later exchanged their vows on 24th August 2019. Presently, the couple lives a blissful life and seem to be happy.

Previously, he also dated Nick Viall in early 2017. The lovebirds started dating while appearing in the 21st season of the reality TV show, The Bachelor. Also, the lovebirds spending nights together and confessing falling for each other. However, their short-lived relationship ended in March 2017, after he dumped her in one of the episodes of the show.

How much is Rachel Lindsay worth?

Being a reality TV star, Rachel has a decent amount of money and fame through her profession in the field of the entertainment industry. Based on some online sites, her estimated net worth said to be $0.4 million at present. However, her salary is yet to be disclosed. She also earned as a lawyer which increased her fortune as well.

How tall is Rachel Lindsay?

Observing her body physics, Rachel stands a height of 5 feet 5 inches and weighs around 55 Kg. Similarly, she has a pair of dark brown eyes and black hair color. Further, her body measures around 34-27-34 inches and she used 32B. Additionally, she used 2 (US) dress size and 7.5 (US) shoe size.

Our contents are created by fans, if you have any problems of Rachel Lindsay Net Worth, Salary, Relationship Status, Married Date, Age, Height, Ethnicity, Nationality, Weight, mail us at [email protected]