Elizabeth Ann Warren is an American politician and former law professor who is the senior United States senator from Massachusetts, serving since 2013. 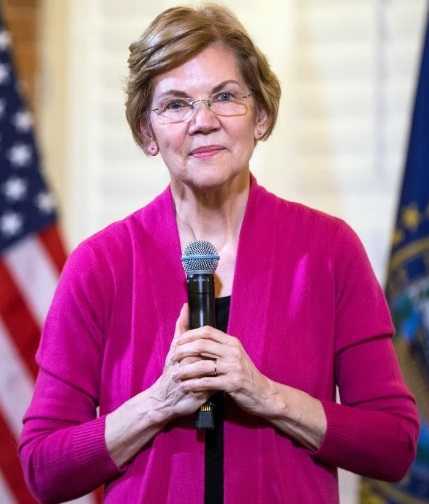 people have voices and votes to push back

people have voices and votes to push back

Elizabeth Ann Warren, popularly known as Elizabeth Warren is an American politician and former academic. She is serving as the senior United States Senator from Massachusetts since 2013. She was formerly a law school professor specializing in bankruptcy law. While in Senate, she has focused on consumer protection, economic opportunity, and the social safety net. She announced her candidacy in the 2020 US presidential election in February 2019.

What is Elizabeth Warren Known as?

Where was Elizabeth Warren Born?

Elizabeth Warren was born on 22 June 1949. Her birth name is Elizabeth Ann Herring. Her birthplace is in Oklahoma City, Oklahoma in the United States. She holds an American nationality. She was born to a father, Donald Jones Herring, and a mother, Pauline Herring. She has 3 older brothers. She comes from a middle-class family.

She won the state high school debating championship at Northwest Classen High School. She won a debate scholarship to George Washington University at the age of 16. She initially wanted to become a teacher. She left GWU after two years.

She married Jim Warren and moved to Houston. She enrolled in the University of Houston, where she graduated with a Bachelor of Science degree in speech pathology and audiology in 1970.

She and her husband moved to New Jersey. After her child turned two, she enrolled in Rutgers Law School at Rutgers University-Newark. She received her J.D. from Rutgers.

She became a teacher for disabled children enrolled in a public school.

She also worked as a summer associate at Cadwalader, Wickersham & Taft during law school.

After she passed the bar examinations, she started practicing legal services from her home.

She taught at several American universities throughout the late 1970s to 1990s.

She was a member of the FDIC Advisory Committee on Economic Inclusion from 2006 to 2010.

She is a member of the National Bankruptcy Conference.

President Obama named Warren Assitant to the President and Special Advisor to the Secretary of the Treasury on the CFPB (Consumer Financial Protection Bureau) in September 2010 to set up a news agency.

She was registered as a Republican from 1991 to 1996 and voted Republican for many years.

She stated that she started voting for Democrats in 1995.

She defeated Scott Brown with 53.7% of the vote becoming the first woman ever elected to the US Senate from Massachusetts.

She defeated Republican nominee Geoff Diehl in November 2018 election for the second term as a US Senator from Massachusetts.

Warren was put forward as a possible presidential candidate for the 2016 US Presidential election.

She repeatedly announced that she would not run for president in 2016 and supported Hillary Clinton.  She formally endorsed Clinton to the president.

Warren officially announced in February 2019 that she would run for the 2020 US president.

She was placed second in the early June polls. Joe Biden is in the lead.

She has also appeared in the documentary films Maxed Out in 2007 and Capitalism: A Love Story in 2009.

She has appeared in the HBO talk show, Real Time With Bill Maher in 2010.

She has appeared in the 2014 documentary film, Makers: Women Who Make America.

Musician Jonathan Mann has written songs about her.

Inducted into the Oklahoma Hall of Fame in 2011.

2009 Bostonian of the Year by The Boston Globe.

The first professor in Harvard’s history to win the law school’s Sacks-Freund Teaching Award for a second time.

Honorary Doctor of Laws degree and membership in the Order of the Coif at Rutgers Law School in Newark in 2011.

Who is Elizabeth Warren Married to?

Elizabeth Warren is a married woman.  She is married to a law professor Bruce H. Mann. They got married in 1980.

She previously married Jim Warren in 1968. They met in high school. The couple shares two children, Amelia and Alexander. They got divorced in 1978.

She lives in Cambridge, Massachusetts.

What is Elizabeth Warren Net Worth?

Elizabeth and her husband’s combined net worth is estimated between $4 million and $11 million.

Our contents are created by fans, if you have any problems of Elizabeth Warren Net Worth, Salary, Relationship Status, Married Date, Age, Height, Ethnicity, Nationality, Weight, mail us at [email protected]