Amy Joanne Robach is a television presenter for ABC News. She is the co-anchor of 20/20 and the breaking news anchor/fill-in anchor for Good Morning America. 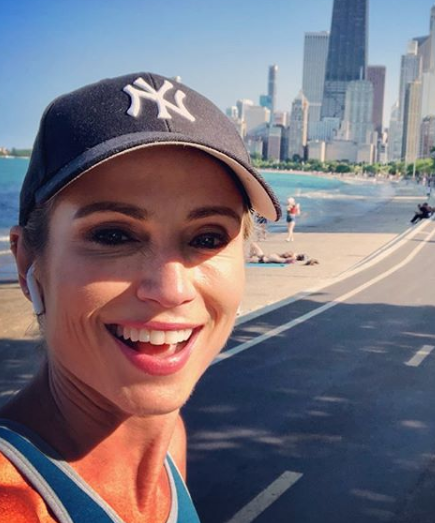 Amy Robach is an American television presenter who is currently working for ABC News since 2012. Robach is the co-anchor of television newsmagazine “20/20” and the breaking news anchor/fill-in anchor for a morning TV show, “Good Morning America”. Previously, Robach worked as a national correspondent for NBC News, co-host of the Saturday edition of NBC’s Today, and anchor on MSNBC as well. Also, she was honored as one of the top 100 powerful Washingtonians by Regardie’s magazine.

What is Amy Robach Famous for?

Where is Amy Robach From?

Amy Robach was born on February 6, 1973, in St. Joseph, Michigan, United States. Her birth name is Amy Joanne Robach. Her nationality is American. Robach belongs to White ethnicity while Aquarius is her zodiac sign.

Amy Robach grew up in three different parts of the country as she first was raised in East Lansing, Michigan after which her family moved to St. Louis, Missouri. Soon later, again they moved to Georgia where Amy attended her high school and college.

Robach attended Brookwood High School after which she graduated from the University of Georgia with high honors in Broadcast Journalism.

Besides, she was more concerned about beauty and talent as she participated in the 1995 Miss Georgia pageant finishing it in 5th place. The same year, she won the Miss Gwinnett County title. She is also a cousin of former Nashville Star contestant Matt Lindahl.

Who is Amy Robach Married to?

The beautiful lady, Amy Robach has been married twice throughout her life. Robach was first married to her husband, Tim McIntosh. McIntosh is a baseball player. The couple got married in 1996 after dating for a few years. Living together for almost 12 years, they filled an uncontested divorce in 2008. The couple together has two daughters: Ava and Analise.

In September 2009, Robach got engaged to Andrew Shue. Shue is a former Melrose Place star. Shue and Robach met for the first time at a book party in April 2008. On Robach’s 37th birthday, February 6, 2010, the couple got married at The Lighthouse at Chelsea Piers. Robach has three stepsons from her marriage to Andrew Shue: Nate, Aidan, and Wyatt.

What is the Net Worth of Amy Robach?

Amy Robach has quite a great earning through her professional career as an anchor of several shows. Robach has managed to amass millions of dollars through her work for more than 16 years on many companies and shows. Her current net worth is estimated to be around $1.5million while her annual salary is around $300k.

She makes an extra fortune of the amount from her books, which helps to increase her net worth.

How Tall is Amy Robach?

Amy Robach is a beautiful lady with a fair complexion and charming personality. Robach stands tall with a height of 5ft. 5inches.( ) while her body weighs around 54kg. She has a well maintained slim body physique which measures 34-25-34 inches with 8(US) as her bra size, 4(US) as her dress size and 8(US) as her shoe size. She has blonde hair and blue eyes.

Our contents are created by fans, if you have any problems of Amy Robach Net Worth, Salary, Relationship Status, Married Date, Age, Height, Ethnicity, Nationality, Weight, mail us at [email protected]